"It is a great privilege to be awarded this prize. I think it is a unique prize worldwide," says Philipp Scherer. On Wednesday he was presented with the EASD-Novo Nordisk Foundation Diabetes Prize for Excellence by Juleen R. Zierath, President of the EASD (left) and Birgitte Nauntofte, CEO of the Novo Nordisk Foundation. Watch Philipp Scherer explaining his research. 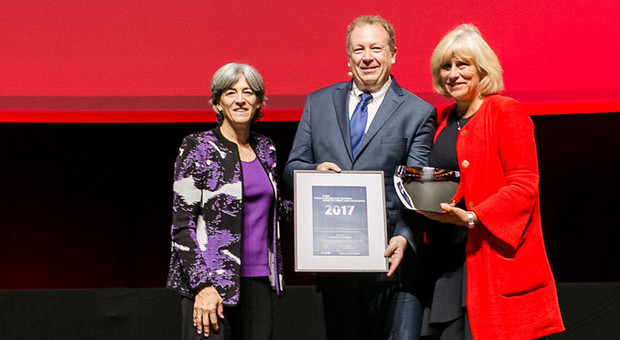 Professor Philipp Scherer was presented with the EASD-Novo Nordisk Foundation Diabetes Prize for Excellence 2017 on Wednesday.

The award ceremony took place during the European Association for the Study of Diabetes (EASD) 53th annual meeting in Lisbon. EASD president Juleen Zierath and Birgitte Nauntofte, CEO of the Novo Nordisk Foundation, were present congratulating Philipp Scherer, before the prize winner gave a talk on his research in front of an audience of close to 3,000 meeting participants. Afterwards there was a reception.

– It is a great privilege to be awarded this prize. I think it is a unique prize worldwide. The prize is bestowed on an individual, but the fact is, that none of this would be possible if it was not based on the work of many individuals that have contributed to the work over the years and has helped us push the research up to the next level.

The Prize is awarded to recognize outstanding research or technology contributions to the understanding of diabetes, its disease mechanisms or its complications

NO MAGIC PILL YET

Philipp Scherer’s comprehensive analysis of fat tissue physiology and highly innovative approach to science have made him a giant in the world of diabetes research. His work has always ranked among the most creative in the field. He discovered adiponectin which, together with the discovery of leptin, ushered in a new era of fat hormones and metabolic diseases.

Dr. Scherer has also shown that adiponectin overexpression expands the adipocyte mass and, in so doing, protects against diabetes. In other words, his amazing finding has established that obesity itself is not the direct cause of type 2 diabetes, insulin resistance and metabolic syndrome, but rather is initially protective by keeping the lipid excess in fat cells and out of other tissues, which are not designed to store lipids. These are fundamental observations that have revolutionized the field.

– Unfortunately, there is no magic pill yet, because adiponectin itself cannot be used in treatment. However, research is already taking place to develop substances similar to adiponectin that can stimulate the adiponectin receptors in the various types of tissue for people who cannot secrete sufficient amounts. This may potentially enable such diseases as type 2 diabetes to be treated.

The Prize is of DKK 6 million. This is the third year that the Prize is being awarded.