Professor Philipp Scherer receives the 2017 EASD–Novo Nordisk Foundation Diabetes Prize for Excellence accompanied by DKK 6 million (€806,000) for his outstanding contributions that have increased our knowledge of diabetes. 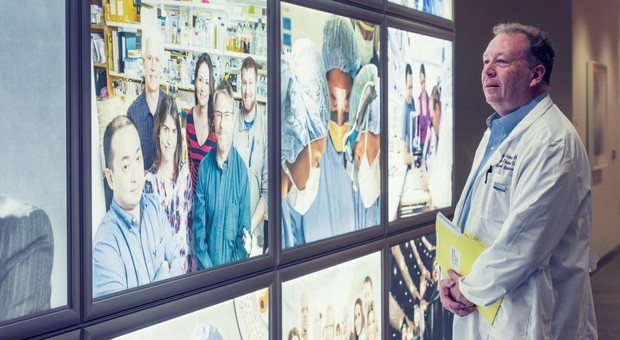 Dr. Scherer’s comprehensive analysis of fat tissue physiology and highly innovative approach to science have made him a giant in the world of diabetes research. His work has always ranked among the most creative in the field. He discovered adiponectin which, like the discovery of leptin, ushered in a new era of fat hormones and metabolic diseases. He has defined the physiological roles of adiponectin and its structure and biochemistry, demonstrating that it is secreted reciprocally with leptin. Both leptin and adiponectin protect against lipotoxicity by ridding tissues of fatty “spillover”. While leptin does this by increasing the consumption of lipids, Scherer showed that adiponectin protects via lowering the levels of toxic lipids.

Dr. Scherer showed that adiponectin overexpression expands the adipocyte mass and, in so doing, protects against diabetes. In other words, this amazing finding established that obesity itself is not the direct cause of type 2 diabetes, insulin resistance and metabolic syndrome, but rather is initially protective by keeping the lipid excess in fat cells and out of other tissues, which are not designed to store lipids. These are fundamental observations that have revolutionized the field. Scherer’s work has completed a pathophysiological makeover of the metabolic syndrome and type 2 diabetes, two of our most common diseases.

Scherer’s work has contributed to a completely new approach to the pathophysiology of the metabolic syndrome and type 2 diabetes, two of the most common chronic diseases. These advances have generated more than 350 publications in journals such as Nature Medicine, nearly 40,000 citations and an h-index of almost 100. Furthermore, he has authored various reviews, commentaries and book chapters, and he holds several patents. He is a sought-after expert nationally and internationally, with many contributions to shaping the future of diabetes research.

For his extraordinary contributions, Philipp Scherer receives the 2017 EASD–Novo Nordisk Foundation Diabetes Prize for Excellence. The Prize is awarded to recognize outstanding research or technology contributions to the understanding of diabetes, its disease mechanisms or its complications.

“It is a great honour to receive this most prestigious European award in diabetes research on behalf of our metabolism community at the University of Texas Southwestern Medical Center in Dallas. We have an outstanding group of investigators in the Touchstone Diabetes Center that effectively team up with researchers in other centers, thereby creating a unique and stimulating environment that fosters collaborative efforts with new interdisciplinary approaches to tackle today’s pressing questions in diabetes research,” says Philipp Scherer.

“Dr. Scherer is one of the most creative scientists in the field of diabetes research. He has transformed our understanding of the pathophysiology of obesity and type 2 diabetes,” commented Juleen Zierath, Professor and President of the EASD.

Birgitte Nauntofte, CEO of the Novo Nordisk Foundation, says: “In awarding this prize for diabetes research, the Novo Nordisk Foundation wants to recognize the best researchers within this important field. I would like to congratulate Philipp Scherer on his outstanding achievements, which have contributed to shaping the future of diabetes research. He is obviously a worthy recipient of the Prize.”

2015: Banting Medal for Scientific Achievement from the American Diabetes Association

2012: O’Donnell Award in Medicine from the Academy of Medicine, Engineering & Science of Texas

The Prize is awarded to an internationally recognized researcher who has contributed significantly to diabetes research. The Prize recipient’s research may focus on prevention, treatment and/or basic research in physiological biochemistry. The research may also be clinically oriented. In addition, the Prize may be awarded for the “discovery of the decade” within diabetes research.

The European Association for the Study of Diabetes e.V. (EASD) is a non-profit, medical scientific association. It was founded in 1965, and its headquarters is based in Düsseldorf, Germany. EASD is one of the largest networks for diabetologists worldwide; membership is open to scientists, physicians, students, postdocs and fellows, allied health professionals and nurses from all over the world who are interested in the field of diabetes or related diseases.

The aims of the Association are to encourage and support research in the field of diabetes, to rapidly diffuse acquired knowledge and to facilitate its application. www.easd.org