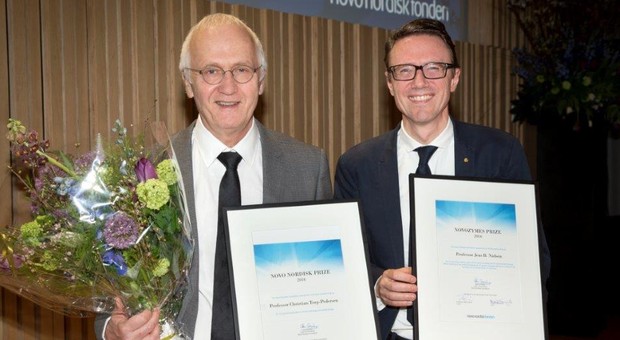 A celebration was held for the recipients of the 2016 Novo Nordisk Prize and the 2016 Novozymes Prize at the annual award ceremony in Bagsværd on Tuesday.

To begin the event, Sten Scheibye, Chairman of the Board of the Novo Nordisk Foundation, and Birgitte Nauntofte, CEO, gave a run through of some of the 2015 highlights of the Foundation before turning the attention to the prize winners. The celebration included short films about each prize winner, while the chairman of each of the prize committees announced professor Christian Torp-Pedersen as the winner of the Novo Nordisk Prize and professor Jens Nielsen as the winner of the Novozymes Prize.

After the nominations, the prize winners took the stage.

“I am speechless, even though I know I am not supposed to be so right now,” said Jens Nielsen before giving a 20-minute lecture about his research to the audience of around 250 persons, while Christian Torp-Pedersen noted that he was “grateful” and “surprised” to receive the prize.

Jens Nielsen is receiving the Novozymes Prize for his pioneering research in systems biology and for his groundbreaking interdisciplinary efforts to characterize and modify the metabolism of microorganisms with the aim of making them produce chemicals so cost-effectively that the methods can be used in industry as an alternative to the oil-based chemical industry.

Christian Torp-Pedersen is being awarded the 2016 Novo Nordisk Prize for his significant, original and internationally recognized work as a researcher spanning the past three decades. He has authored or co-authored more than 500 scientific articles published in such highly renowned journals as The New England Journal of Medicine and The Lancet. Other researchers frequently cite many of these articles, making him one of the most influential clinical researchers from Denmark, which also benefits patients.

The event concluded with a dinner at which several former prize recipients were present.