Researchers full of praise for “Cell Factories and Biosustainability”, the latest edition of the Copenhagen Bioscience Conferences. 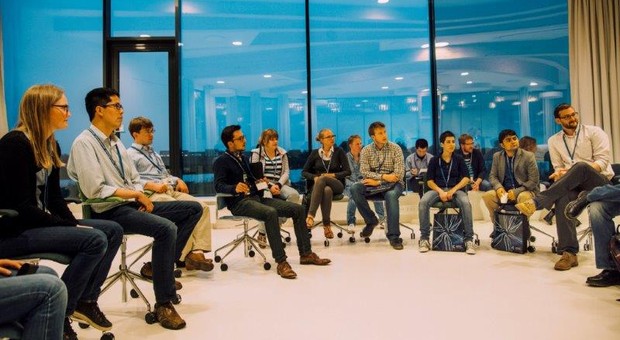 In his career, Assistant Professor and Group Leader Sotirios Kampranis, University of Crete, Greece, has seen his fair share of conferences. Still, his experience at Favrholm will not be lost in the mix.

– I would say I go to maybe five conferences per year, he says.

– I think this is probably one of the best organized conferences, I have been to. The setting and the facilities have been perfect. All the presentations were on time, there was time for discussion, there was no rush. I will certainly recommend it, he says.

At the four-day conference, held 18-21 May, a string of the world’s top scientists in the field headlined a program focusing on technologies for cell factory construction. Topics included “Enzyme engineering”, “Emerging technologies” and “Genome editing”.

– The conference is excellent, a really good group of people and a very nice mixture of academic research and more industrial things, he said during a poster session.

OFF THE BEATEN PATH

Another speaker, Professor Jack Pronk, Delft University of Technology, the Netherlands, was impressed by the science presented:

– The organizers managed to schedule lectures on exciting subjects that are slightly off the ‘beaten path’. For example, I tremendously enjoyed the presentation by Professor Derek Lovley on microbial electrosynthesis, a fascinating new approach for producing chemicals from electricity and CO2, he says.

Thian Zhan, Group Leader at the Novo Nordisk Foundation Center for Biosustainability, the host of the Conference, was equally pleased:

– The conference has been like a knowledge brainstorm. I have got a lot of new inspiration from the talks and from talking to experts from different fields, she says.

FOR RESEARCHERS AT ALL CAREER LEVELS

The Conference was the 8th edition of the Copenhagen Bioscience Conferences. The aim of the conferences is to bring together top researchers and young talent to discuss the latest scientific results and hottest topics within a particular field, enabling participants to build an international network and to exchange knowledge and ideas to enhance their research.

Senior Researcher Hyun Uk Kim, University of South Korea, participated in the first conference two years ago and came back for the 2015 edition.

– It was simply the best conference I have ever attended. I was really amazed by the program and the environment, which encourages people to interact. I also liked the randomizing of the seats at dinner. That gave me an opportunity to talk to new people such as Jack Pronk who I talked to for the first time, he says.

Hyun Uk Kim shares his time between the University of South Korea and the Novo Nordisk Foundation Center for Biosustainability in Denmark.

Could you imaging staying in Denmark full time?

– I personally love like the Danish lifestyle. The Scandinavian lifestyle in general is very popular among Korean people because of this work and life balance. I am also impressed by the teamwork here. It is extremely good. Korean people are also good at teamwork, but I think here it is better – very constructive. I would love to be here full time if I get a chance, he adds.

The Conference participants came from more than 20 nations, including Australia, the United States and Thailand. Also participating were three editors from scientific journals, who took questions from researchers at the Editors Corner session.

Science’s Nick Wigginton could see both groups benefitting from this.

– The most important part of my job is building trust with the community. Being here helps me find reviewers and helps me see what exiting topics are emerging. It helps my confidence in reviewing papers.

– For the researchers, a lot of the times when they submit a paper to a journal it is just a black box. This is kind of a way to put a name to a face and get feedback from us. They have an opportunity to get feedback on what we are doing, he says.

After three hectic days of scientific debate, the conference ended with a visit to the site of the conference host, the Novo Nordisk Foundation Center for Biosustainability. Here the conference participants could have a look at the Center facilities.

For Sotirios Kampranis, the conference turned out to be fruitful and the trip across Europe to Denmark may not be his last.

– The conference was dedicated to cell factories, which is not very common. The scientific level was very good. Some of the speakers were outstanding. It was important to have them here.

Would you come back in two years if there is another conference?

– It would be a priority. Next time, I would also try to get some of my students to participate because I think it is a very good environment. It is very open for discussions, he says.