The 2017 Danish Sports Prize has been awarded to the FC Prostate research project, which is currently studying how playing football at local sports clubs affects men with prostate cancer. The project is based on the inspirational results from a PhD study co-funded by the Novo Nordisk Foundation. Photo: Trygfonden/Morten Germund. 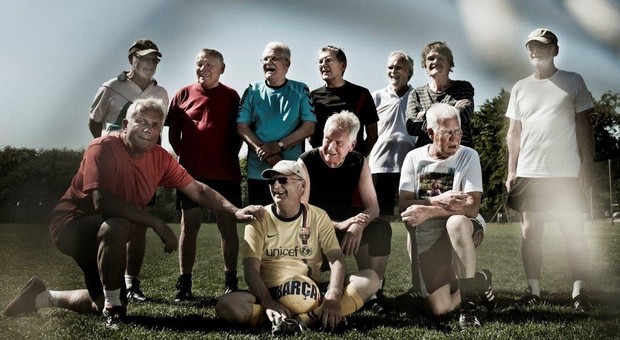 Prostate cancer is the most frequent type of cancer among men in Denmark. It develops slowly. Nevertheless, at some point half the men with the disease are offered castration-based treatment that reduces the amount of testosterone. This leads to such effects as muscle and bone loss and the risk of other diseases such as diabetes.

These men can benefit from rehabilitation in the form of exercise training and socializing with other people. However, Denmark’s healthcare system has faced challenges in offering services that men actually use. A few years ago, researchers attached to the Centre for Integrated Cancer Rehabilitation (CIRE) came up with the idea of testing football training as rehabilitation. They thought that playing games with the boys on the field might be able to recruit and retain people with cancer and thereby contribute to rehabilitation.

The researchers therefore started the FC Prostate research project, which the Novo Nordisk Foundation partly funded from 2012 to 2014 through CIRE. In the project, 57 men with prostate cancer played football two or three times a week for 12 weeks. Then they played once or twice a week for a further 20 weeks. Researchers monitored them continually, including Jacob Uth, a physiotherapist and PhD student. Jacob Uth has now completed his PhD degree and is a postdoctoral fellow at the University Hospitals Centre for Health Research at which CIRE is based.

“We wanted to determine whether the excellent results from the first study with training within a university setting could be extended and sustained in the local sports community. At the end of January, we are starting a 6-month training programme in the last club of five, KFUM in Odense. We hope we can monitor these men in the long term. Through long-term monitoring, we can examine whether the men who have played football live longer and are less prone to developing other diseases such as type 2 diabetes,” she says.

A total of 220 men are participating in the FC Prostate Community. Half play football in a local club, and the other half are offered the usual rehabilitation activities in their municipalities. The project collaborates with several partners, including the Danish Football Association and six departments of urology in Copenhagen, Aarhus and Esbjerg.

Julie Midtgaard says that the support of hospital doctors and nurses has been vital in successfully recruiting players.

“Our close collaborators at the Danish Football Association tell me that recruiting participants for this type of initiative can be a challenge. Clinicians who are confident in the relevance of the project and who urge people with prostate cancer to take part have been very important to us. We have established the credibility of the benefits of football from the initial research in FC Prostate, which was a stepping-stone for future work,” she says.

It is still too early to assess the effect of playing football in clubs, but the project has been successful in encouraging men to want to keep playing football. Many men continue to play in the local clubs when the 6-month period of “scientific” training ends.

In 2012, the Novo Nordisk Foundation and the Danish Cancer Society each awarded 5-year grants of DKK 15 million for establishing the Centre for Integrated Cancer Rehabilitation (CIRE). The Centre is an interdisciplinary and interprofessional collaboration between researchers and clinicians from the Department of Public Health of the University of Copenhagen; Rigshospitalet and Herlev and Gentofte Hospital, Capital Region of Denmark; and the City of Copenhagen. The Centre focuses on patient groups whose rehabilitation has not previously been studied by researchers.

RESEARCH ON FOOTBALL AND PROSTATE CANCER

Read more about the football project being rolled out in five Danish football clubs – Østerbro IF, Fremad Valby, IF Lyseng Fodbold, Esbjerg forenede Boldklubber and Odense KFUM – at www.fcprostata.dk (in Danish).