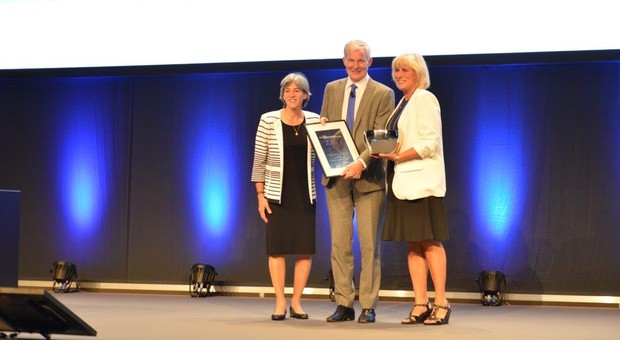 The award ceremony took place during the European Association for the Study of Diabetes (EASD) 52th annual meeting in Munich. EASD president Juleen Zierath and Birgitte Nauntofte, CEO of the Novo Nordisk Foundation, were present congratulating Andrew Hattersley, before the prize winner gave an a talk on his research in front of an audience of close to 4,000 meeting participants. Afterwards there was a reception.

– It is an enormous honor to win this prize. I will very much dedicate it to the colleagues I’ve worked with. Without them I would not have achieved anything. I think this is a fantastic chance for us to have not only our research recognized but also to go forward and do new research, said Andrew Hattersley, professor at the University of Exeter Medical School, and diabetes consultant at the Royal Devon & Exeter Hospital, United Kingdom.

NEW APPROACHES TO DIAGNOSIS AND TREATMENT

The Prize is awarded to recognize outstanding research or technology contributions to the understanding of diabetes, its disease mechanisms or its complications

Andrew Hattersley has focused his research for the last 25 years on understanding the genetic forms of diabetes known as monogenic diabetes. This has led to not only new scientific insights but also new approaches to diagnosis and treatment for the patients.

Monogenic diabetes results because one of the 3 billion bases in a patient’s genetic code is altered. Andrew Hattersley and his excellent genetics colleagues in Exeter have found the single altered base in 3 billion for 15 different genetic types of diabetes. Finding the genetic cause of the diabetes has led to the recognition of new subtypes of diabetes that have unique clinical features, with specific requirements for their treatment and clinical care.

The Prize is of DKK 6 million. This is the second year that the Prize is being awarded.