A research team at the Novo Nordisk Foundation Center for Biosustainability led by Irina Borodina has engineered yeast to produce a chemical that can replace fossil–based acrylics, which are used for making nappies, paints, and various plastic materials. From left: Svetlana, Niels, Jérôme, Kanchana and Irina. 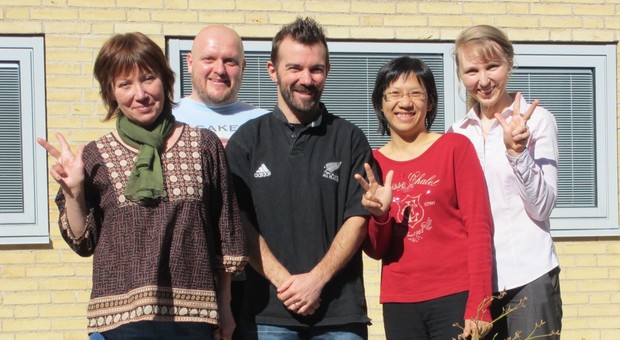 Modern nappies and sanitary pads are very comfortable but their production is not sustainable. The reason is that the acrylate polymers that provide the superabsorbent effect are created by depleting non-renewable fossil resources. A research team at the Novo Nordisk Foundation Center for Biosustainability has developed a process for production acrylates from sugar using genetically engineered yeast cells.

“Our research is well on the way, and we are now in discussions with various companies that can implement the last steps to industrial production,” says Irina Borodina, project manager at the Center.

Irina Borodina has a degree in chemical engineering from her native Lithuania.

“I really wanted to work in biotechnology, and the Technical University of Denmark (DTU) had recently established an MSc programme in this field, and I started in the first year.”

This was followed by PhD and postdoctoral fellowships at DTU before she joined the Novo Nordisk Foundation Center for Biosustainability .

“The Center is the place to be if you want to research cell factories at a high international level. The Center has assembled a team of elite international scientists and has developed a unique infrastructure that particularly focuses on research in metabolic engineering. This provides excellent development opportunities for young project managers, postdoctoral and PhD fellows.”

The yeast cells have been engineered to produce 3-hydroxypropionic acid, or simply 3HP. This substance can be converted to acrylic acid, thereby replacing fossil–based acrylics in nappies, sanitary pads, acrylic paint and plastic.

Globally, more than 5 million tonnes of acrylic and related products worth about USD 12 billion are produced annually and the market is expected to grow by 3.7% annually in the coming years.

“We chose 3HP because it has enormous economic potential. Conversely, the competition is fierce, so we need to minimize the production costs. We cannot expect consumers to pay significantly more simply because the material is sustainable,” says Irina Borodina.

The research team published two articles on 3HP in Metabolic Engineering journal in December 2014 and January 2015. It has also lodged three patent applications.

“We have had to be extremely innovative, primarily because yeast does not produce 3HP naturally,” explains Irina Borodina.

In particular, they had to alter the genetic material of the yeast. The first step involved implanting genes from other organisms that can produce 3HP. The next step was to ensure that the yeast remains alive as it begins to produce.

“When you teach an organism to produce a material it does not produce naturally, there is always a risk that it will poison itself. This can be quite complex, and this is one reason why we have been the first to succeed.”

Starting commercial production requires a third step of making the yeast significantly more productive, something that requires partnership with a company.

“Acrylic must be manufactured in a large factory, enabling it to be produced at a competitive price. This is outside the scope of the Center. We can take the technology closer to the market than it is now, if there is an industrial partner willing to invest in putting the idea into practice,” says Irina Borodina firmly.

“We want to do this, but it requires a partnership agreement with a major company.”