Ill People Have to Overcome Their Good Health

New research shows that when people become ill, they become more susceptible to several diseases at the same time. 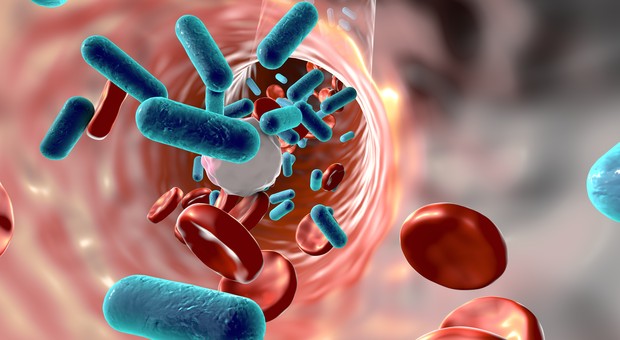 A disease rarely occurs alone. Nature has endowed the human body with a robustness that can keep people healthy despite unhealthy lifestyles or toxic environments. New research shows, however, that when people become ill, they have to fight this very robustness, resulting in being more susceptible to several diseases at the same time.

People with complex disease trajectories inadvertently place a burden on health care systems. For example, people hospitalized with cancer may be found to have blood poisoning on admission. Because the expertise in treating these diseases is concentrated in very different departments, the people with these diseases often receive ineffective and sometimes even counterproductive treatment. Researchers in Denmark have now described a conceptual model and show a possible way to study this type of problem in an article in Nature Reviews Genetics.

“The increasing electronic collection of health transaction data combined with ever better technology and models for analysing these data has provided us with new insight into the co-occurrence of diseases. Using this knowledge, we can begin to develop completely new strategies for treating these people,” explains Søren Brunak, Group Leader of the Translational Disease Systems Biology Group at the Novo Nordisk Foundation Center for Protein Research.

In its new research, the Søren Brunak Group has integrated many years of international research into a completely new model that attempts to create an overview of which disease trajectories occur most frequently, including which ones result from the same underlying cause and which trigger each other. The Group’s new research therefore sheds completely new light on the old discussion on the respective roles of genetics and the environment.

According to Søren Brunak, “Our genes are one of the keys to understanding what influences humans to remain healthy or become sick. Some diseases, or their best treatment options, can be predicted from mutations in specific genes, and other diseases seem to have an environmental aspect that completely or partly determines whether a person becomes ill.”

Humans have quite few genes. In the 1960s, based on the size of the human genome, scientists calculated that we probably have about 6 or 7 million genes. Later, it was discovered that large parts of the human genome contain regions with no genes as well as large areas within genes called introns that do not code for proteins. As a result, the estimate was reduced to 150,000.

“Today, it is known that humans have fewer than 20,000 protein-coding genes, and this strongly influences our health. The relatively few genes in humans mean that the same gene presumably can be linked to several illnesses at the same time. In biology, this is called pleiotropy,” adds Søren Brunak.

ROBUST PEOPLE ARE HARD TO KNOCK OFF BALANCE

In practice, this means that people often have several diseases simultaneously, and establishing whether a specific disease causes another and which disease someone actually contracted first can often be difficult. The large quantities of new electronic health transaction data therefore help to draw a completely new picture of how and why people become ill. The interaction between such data and the underlying molecular causes is key in  the new model from the Danish researchers.

According to Søren Brunak, “With the new model, we attempt to integrate the existing knowledge into a comprehensive model that transcends all known diseases. There is often complicated interaction between inherited characteristics – genes – and the influence of the external environment. Robustness is an essential element. If a person is inherently very robust, being knocked off balance is more difficult, and the person therefore more easily remains healthy.”

However, this robustness has a downside. This manifests itself when very robust people are thrown off balance. Robustness is advantageous in a healthy state, but it also seems also to be associated with people remaining ill longer once they become sick.

Living systems are dynamic and,  according to the researchers, this phenomenon has presumably been an important evolutionary advantage in protecting early humans against famine and infections. Nevertheless, the dynamics of this system seem to be negatively affected by such factors as overnutrition, which can lead to metabolic diseases. Thus, the same dynamics that help us to stay healthy can keep us ill longer. 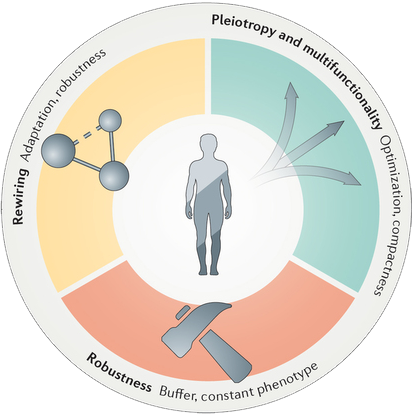 According to the researchers, together with robustness and pleiotropy, the third key element is rewiring. This means that biological molecules such as proteins or genes form new interaction partners because of changes in the molecular environment such as a lack of vital nutrients or when genes are affected by  mutations. These changes require that the body temporarily or permanently adapts itself to the new situation.

“This could be a protein that is folded slightly differently and thereby interacts differently with other proteins or a gene that no longer expresses itself in a specific type of tissue for a period of time. In this way, the body is continually adapting to the surroundings and helps to preserve the required robustness and to create enduring changes,” says Søren Brunak.

Type 2 diabetes is an example of a disease in which modern lifestyles lead to rewiring, which results in a new condition in which insulin resistance arises and in which the functioning of insulin-producing cells deteriorates.

According to Søren Brunak, “Finding optimal treatment strategies is made complicated by not being able to create a model that has the simplicity of Niels Bohr’s model of the atom, for example. Nevertheless, our new model contains concepts that can create a common reference we can use as basis for describing extremely complicated disease trajectories in the future.”

Søren Brunak believes that their new model may inspire researchers to delve down into the molecular mechanisms in novel ways. The model may be able to lead to new, more effective and especially more individualized treatment for each person.

“Previously, pharmaceutical companies have had to develop most drugs based on trial groups typically comprising people with a simpler and more obvious disease profile. Similarly, drugs are normally developed to treat one disease in the absence of other diseases. This means that many drugs do not work effectively on the people who deviate from the norm by have many co-occurring diseases.”

“In Denmark, we have a unique opportunity because we link all health and socio-economic information to one unique social security number. If we could combine this knowledge with knowledge on individual people’s genetic and protein profiles, we could almost certainly better avoid much unnecessary and ineffective treatment, thereby saving the health care system considerable money.”