Life and Death Struggle in Dreamland

You can take two paths. One is a tunnel with a light at the end. A voice whispers: stop breathing and you can end up there. The other path leads to your daughter. She is pregnant. If you choose this path, you will get to see your grandchild (Photo: Shutterstock). 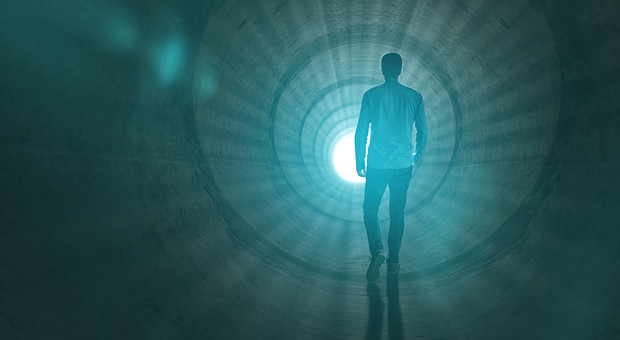 You can take two paths. One is a tunnel with a light at the end. A voice whispers: stop breathing and you can end up there. The other path leads to your daughter. She is pregnant. If you choose this path, you will get to see your grandchild.

Most people find such stories incredible – in fact, so incredible that they do not believe them. Nevertheless, such tales are a part of daily life for patients and personnel in intensive care departments. Danish researchers recently carried out the largest investigation so far of how people’s memories of delusions from intensive care and how this experience affects the discharged survivors.

“Many people fighting for their lives also have to struggle with reality. As their physical body stress due to severe illness, the brain suffer as well. One effect is that reality and fantasy converge in delirium. We all know about dreaming – and feeling relieved when we wake up and find out that a bad dream was just a dream. The problem for these delirious patients is simply that this often happens when they are awake, meaning that the dream is experienced as reality. Waking up does not make the dream go away,” explains Helle Svenningsen, PhD and Assistant Professor at VIA University College.

A THREEFOLD RISK OF DEATH

The research was carried out at Aarhus University Hospital and Nordsjællands Hospital and is the largest published investigation of how people experience intensive care. Helle Svenningsen interviewed 325 patients about their memories 2 weeks, 2 months and 6 months after discharge from intensive care; 114 patients remembered one or more of their delirious moments. This is both scary and beautiful, but it is also surprising.

Nevertheless, Helle Svenningsen does not believe that using a method other than the current Confusion Assessment Method for the Intensive Care Unit (CAM-ICU) will identify more patients with delirium without simultaneously falsely interpreting other types of episodes as delirium (false positives). Instead, she hopes that the study can help nursing personnel in intensive care units become more skilled at helping patients deal with their often-intense experiences.

According to the research, four phenomena may account for the dream-like delirious state. One is related to a person’s physical struggle to survive, and this seems to be reflected mentally in their delirious state. Many patients describe having to struggle against an enemy – an enemy that wants to kill them.

“We therefore also hypothesized that such memories can cause post-traumatic stress disorder similar to what many soldiers experience, but our previous studies could not prove this. Conversely, other studies have shown that delirium can accelerate the onset of dementia among both old and young people, and focusing on these patients is therefore important, including after discharge from hospital.”

In the months following discharge, patients are often devastated mentally by their experiences, which seem very realistic and yet are divorced from reality. These people often consider their delirium to be a kind of experiment in which, for example, they have to solve a problem and defeat an enemy to survive. Sometimes they even believe that the nursing personnel are the enemy.

“Fortunately, reality turns out to be much more tangible if the patients get to discuss their experiences. Our studies began in 2004, when I was working as a clinical nurse specialist in an intensive care department. One patient I tried to talk to about his illness kept talking about his surreal experiences. It was very frustrating until I realized that I was asking the wrong questions.”

FAMILY MEMBERS HANGING FROM THE CEILING

This new project started as a purely quantitative study. Researchers using the Intensive Care Unit Memory Tool studied intensive care patients and quantified how many dreams, nightmares, hallucinations and feelings that someone was trying to harm them they could remember after discharge.

When I finished, I had an incredible amount of extra material and wondered whether I should just ignore all these stories. But I also realized that many of the patients’ memories might be directly interpreted as experiences that the patients could actually have had.”

For example, many patients recall memories about dynamic space through which they continually move; this may stem from being transported around the hospital by a porter. Others report having seen a deceased relative hanging from a hook in the ceiling; from the patient’s perspective, this could result from lying in a hospital bed and viewing their visiting family from below.

“Even though the patients’ stories sound incredible, the most important thing nursing personnel or family members can do is to listen to the patients and understand that the stories are very real for them. We can also tell them that other people have had similar experiences so that they do not need to feel totally alone with their intense experiences.”

The study also surprises positively in several respects. More than half the patients who could not remember dreams, nightmares, hallucinations and feelings that someone was trying to harm them while staying in an intensive care department had actually been delirious. An important goal for Helle Svenningsen was to intensify the focus on these patients.

“We cannot prevent patients from becoming delirious, because this arises from their critical physical state, but we can listen and talk to them, because this seems to help them in processing and coping with their memories so that, over time, they will virtually forget them or accept them.”

Aarhus University Hospital organizes a monthly intensive care café at which patients can meet and talk to each other and with experienced nursing personnel about their experiences and memories. Many people take up this offer. Helle Svenningsen hopes, however, that the new study will help to further raise the awareness of the personnel in intensive care departments and relatives.

“Many of the patients with whom I have talked in connection with the study have subsequently thanked me because having someone who would listen helped them cope with their traumas. Now that we have healed them physically, healing them mentally is also important so they become a whole person again.”

“Strange and scary memories of the intensive care unit: a qualitative, longitudinal study inspired by Ricoeur’s interpretation theory” was published in the Journal of Clinical Nursing.

In 2011, the Novo Nordisk Foundation awarded Helle Svenningsen a grant for the project “Associations between Sedation, Delirium and Post-traumatic Stress Disorder Resulting from Admission to an Intensive Care Department”. The research was carried out at Aarhus Universitety Hospital og Nordsjællands Hospital.