Today, the Novo Nordisk Foundation Center for Biosustainability has small bioreactors available that can accurately measure such parameters as temperature, oxygenation and cell metabolism. In the future, larger bioreactors will help to mature these cell factories into industrial production units. Photo: Anne Wärme Lykke. 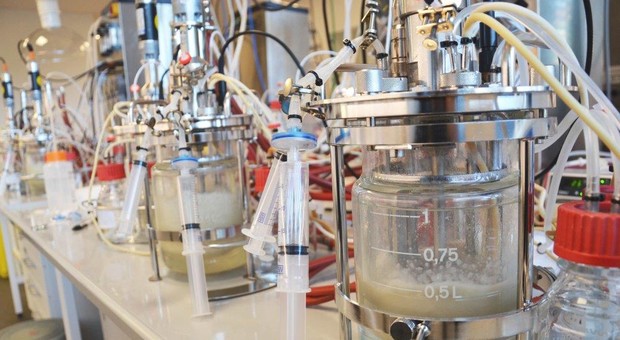 The Foundation has awarded the grant to establish a fermentation plant that will enable the Center to test potential products on a much larger scale. The Center conducts research on developing cell factories: bacteria, yeast or mammalian cells that are genetically modified so they can produce valuable drugs or chemicals. Previously, the researchers were only able to test the performance of cell factories in small flasks and test tubes. The new plant will enable experiments to be scaled up in 30-litre tanks to predict how cell factories perform on a larger scale in an industrial setting, thereby accelerating the ability to manufacture such products as drugs and chemicals sustainably.

“Developing a cell line that is very productive in small trials does not guarantee that the cells will produce efficiently in the large bioreactors used by industry. The new plant can give a more realistic idea of the potential and the costs associated with specific types of products,” says Bernhard Palsson, CEO of the Center.

“If Denmark is to keep producing sustainable chemicals, foodstuffs and drugs on a large economic scale, we need to solve the challenges and make production more efficient. Today, many cell factories are never used in industry because scaling them up is too difficult and expensive,” he adds.

The pilot plant will be able to test all the parameters that are important in industry, including temperature, pressure and oxygenation.

“We have awarded a grant to the Novo Nordisk Foundation Center for Biosustainability for establishing a fermentation plant that will enable the Center to develop and test bioproduction processes and investigate what happens when a process is scaled up from the laboratory scale to nearly industrial scale. This is important knowledge that can help the Center in determining the potential for commercializing the various products with which the Center works.”