The Novo Nordisk Foundation has awarded grants of DKK 6 million to three professors to enable them to investigate the commercial potential of a research discovery. 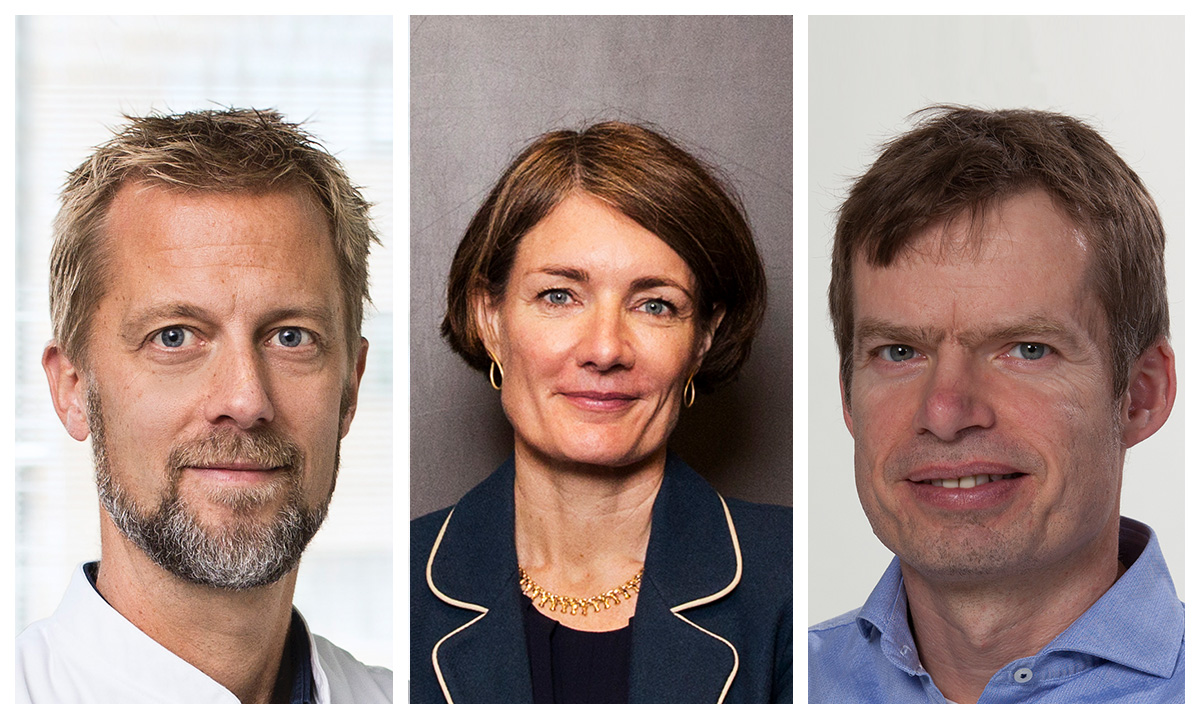 Anja Boisen from the Technical University of Denmark and Kristian Strømgaard (left) and Trond Ulven from the University of Copenhagen are each receiving an innovation grant of DKK 6 million from the Novo Nordisk Foundation.

The grants provide the three professors with an opportunity to explore whether discoveries they have made can be developed into novel drugs or new solutions that end up benefitting both patients and society – while remaining at their respective universities.

The three scientists will also serve as ambassadors for innovation and will be given the title of Novo Nordisk Foundation Distinguished Innovator. This emphasises that the grant recipients will promote innovation at their universities: for example, by teaching students and researchers and by disseminating knowledge about innovation processes so that many more people choose to translate their discoveries alongside their academic careers.

“With the grants, we want to stimulate innovation and entrepreneurship at the universities, thereby enabling many excellent research discoveries to be translated into new products and solutions that benefit society,” says Mikkel Skovborg, Senior Vice President, Innovation, Novo Nordisk Foundation, who adds:

“The projects awarded grants are all very ambitious and have great potential, and we look forward to supporting them and following them over the next 3 years.”

In her project, Anja Boisen will develop and explore a new method for cell culture in connection with pharmaceutical testing of new drugs. The goal is to develop an affordable and user-friendly platform for cell culturing and thereby lower the barrier for a rapid transition to clinical use of drugs.

Trond Ulven’s project will develop new drugs targeting fibrosis, the formation of scar tissue in organs such as the heart, liver or lung, which may contribute to the organs not functioning properly. Kristian Strømgaard’s project will explore the potential of establishing a new platform for developing drugs to treat diseases in the brain.

Support from experts
In addition to the grants over the 3-year project period, the recipients will receive the support they need to succeed in maturing the project, including assistance from experts in legal services, entrepreneurship and innovation – resources that are not typically available at Denmark’s research institutions.

The grants will enable researchers to pursue parallel research tracks in basic and translational research without derailing the researcher’s academic development or career.

New call in August
The Foundation is opening a new call for applications in August, under which researchers in Denmark can once again apply for a Novo Nordisk Foundation Distinguished Innovator grant. The Foundation will view previous experience with innovation and entrepreneurship positively when assessing applications.

“We support research in the life sciences, including largely industrial biotech and medtech, and we hope that many people would like to apply to receive one of these exciting grants with the future in mind,” says Mikkel Skovborg.

The grant recipients and their projects

Project description: Clinical and pharmaceutical testing of new drugs as well as diagnostics and choice of treatment are often based on growing cells in petri dishes and flasks and monitoring the response to certain treatments. Cell-based assays can reduce the number of animal experiments and can further open up for more personalised treatment strategies. However, cell culturing is tedious and still requires a lot of manual labour, such as optical microscopy inspection. Here, we instead propose to develop and explore cell culturing on a platform that resembles a compact disc. The channels and culture chambers are engraved in the disc. The flow of nutrients is provided by spinning the disc and utilising the generated centrifugal forces. The simplicity of the design will lower the barrier for a fast transition to clinical use. A year after project completion, we expect to have a Denmark-based spin-out company providing reliable, affordable and user-friendly platform for cell culturing in flow and with online automated monitoring.

Project description: We are witnessing a paradigm shift in a fundamental area of biology, namely that confined biological units can exist without membranes and exist as biomolecular condensates. This is being explored in many branches of biology, and the importance in both health and disease has been established. We are starting to see biomolecular condensates being investigated in drug discovery, with new biotech companies being established. In the cells of the brain, neurons, it has been shown that a very important component of neurons, called the postsynaptic density (PSD), is functioning as a biomolecular condensate. It is known that several brain diseases are related to the PSD, and in this proposal we will build on these new findings in a drug discovery context. We will establish a drug discovery platform and develop compounds that modulate the diseased state of the PSD. This is an entirely new principle in drug discovery and can provide much-needed treatment for devastating diseases in the brain.

Project description: Fibrosis is scar formation in an organ that is stressed and inflamed. We all know scars in the skin, but the process can happen in any organ, such as in the heart, liver or lung, and will often have much more serious consequences in these other organs since the scars can interfere with the fine structures that are necessary for the proper functioning of the organs. Fibrosis is an important component of many diseases, such as heart attack, liver disease and COPD, and is also common after COVID-19 and contributes to deaths and long-term effects. The molecular mechanism of fibrosis in the different diseases is similar. In this project, we aim to develop drugs to treat fibrosis by activating or inhibiting several signal-receiving cell surface proteins (receptors) at the same time. The optimal receptors will be identified based on their signalling mechanism and analysis of drugs that interact with the receptors and influence fibrosis, and drugs will be developed that activate or inhibit these.