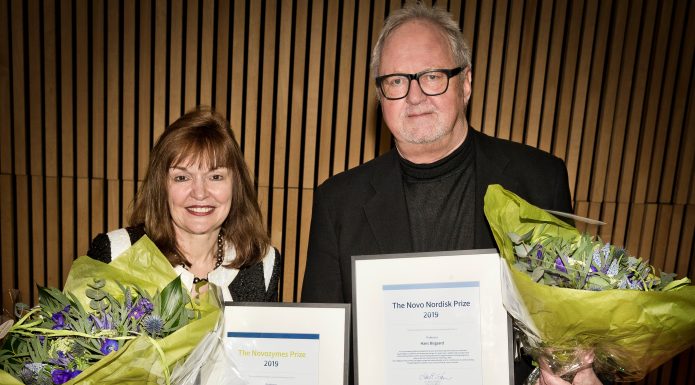 The Novozymes Prize and the Novo Nordisk Prize, two of the Novo Nordisk Foundation’s most prestigious prizes were awarded at a prize celebration event in Bagsværd, Denmark on Friday, 15 March to Professor Dame Carol Robinson and Professor Hans Bisgaard respectively.

Each Prize is accompanied by DKK 3 million: DKK 2.5 million for the Prize recipient’s research and a personal award of DKK 0.5 million.

Carol Robinson is receiving the Novozymes Prized for her scientific breakthrough in the use of mass spectrometry for analysing proteins. Among her many achievements, she became the first female professor of chemistry at the University of Oxford, one of the world’s most respected universities. Her methods have been widely used in the biotechnology industry and have contributed to the development of new drugs.

Hans Bisgaard, Professor, Specialist Physician and Doctor of Medical Science, Danish Child Asthma Center, Herlev Hospital and Gentofte Hospital is receiving the Novo Nordisk Prize for his pioneering research efforts to understand how asthma and other inflammatory diseases emerge early in life and how to improve the treatment of these diseases.

The evening concluded with a dinner for the assembled guests, including several former prize recipients.