"The two Prize winners – Emmanuelle Charpentier and Virginijus Siksnys – have been at the forefront of developing CRISPR technology. They are both obvious recipients of the 2017 Novozymes Prize," says Søren Molin, chair of the Prize Committee. 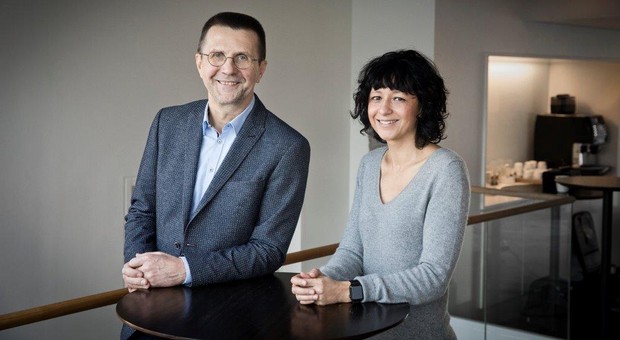 Emmanuelle Charpentier and Virginijus Siksnys are receiving the Prize for their pioneering research activities, which have been key in developing the CRISPR-Cas9 genetic tool – a type of molecular scissors – that enables researchers to edit and modify the genes of various organisms, including bacteria, mice and even humans.

Only a few years ago, editing the genes in many organisms was a very complicated and time-consuming task that required re-engineering proteins that could cut and splice at a specific location on the genome. Developing the CRISPR-Cas9 technology has dramatically reduced the time needed for targeting organisms for biotechnological applications, and scientists throughout the world have adopted the new technology. In addition, the system has shown enormous potential, such as treating humans who have specific diseases. The technology can also be used for creating characteristics in crops that make them more robust.

The Novozymes Prize is awarded to recognize a pioneering research effort or a technological contribution that benefits the development of biotechnology science. This is the first time that two researchers have shared the Prize, which is accompanied by DKK 3 million. The Novo Nordisk Foundation awards the Prize.

“I am very honoured to have been selected to receive the 2017 Novozymes Prize. The CRISPR-Cas9 technology is truly transformative for the field of life sciences, offering economical and speedy genetic engineering in cells and organisms of the three domains of life. I would like to thank my team, which has accompanied me in the journey from the discovery of tracrRNA in the human pathogen Streptococcus pyogenes to the deciphering of the dual-RNA Cas9 mechanism and its evolution in bacteria. I am overwhelmed by the broad success of the technology and its multiple applications. I thank the Novo Nordisk Foundation for the generous funds that will help to support my research on the understanding of bacterial infection mechanisms.”

“It is great honour and privilege to receive the 2017 Novozymes Prize. It came as a big surprise. For many years, we have been trying to understand the molecular systems that protect bacteria against invading viruses. I am really pleased that our research aimed at deciphering the CRISPR mechanisms paved the way for developing novel genome editing tools and is being recognized by the Novozymes Prize. It nicely demonstrates that curiosity-driven research aimed at understanding fundamental biological questions can provide groundbreaking applications. The Novozymes Prize will provide a unique opportunity to explore new research avenues.”

The CRISPR-Cas system was discovered through research into the immune systems of bacteria. Bacteria use this system of editing and storing the gene sequences from invading viruses so that they can recognize and defend themselves against these viruses later. Emmanuelle Charpentier and Virginijus Siksnys have each played a decisive role in clarifying the details of how these systems work and showing how they can be used technologically to precisely edit the genomes in many organisms. This technology preliminarily culminates many years of seeking a more efficient and precise way of changing the genome of living cells.

“The development of the CRISPR technology has suddenly paved the way for rapidly and precisely editing the genomes of all types of organisms, from bacteria to human cells. The CRISPR technology offers fantastic opportunities, including designing cell factories with unprecedented efficiency and precision. This is an obvious biotechnological benefit that has already changed the perspectives related to green technology and the biological production of chemicals and drugs,” says Søren Molin, chair of the Prize Committee.

“The two Prize winners – Emmanuelle Charpentier and Virginijus Siksnys – have been at the forefront of developing CRISPR technology. Their respective research fields enabled them to leap from several biological discoveries to a major breakthrough with immeasurable consequences for biotechnology and other important fields. They are both obvious recipients of the 2017 Novozymes Prize – five years after their respective pioneering research,” he adds.

Has won the Breakthrough Prize in Life Sciences and the Gottfried Wilhelm Leibniz Prize, Germany’s most prestigious research prize

Selected by Time Magazine in 2015 as one of the world’s 100 most influential people.

ABOUT THE NOVOZYMES PRIZE

The Prize is awarded to recognize a pioneering research effort or a technological contribution that benefits the development of biotechnology science to generate innovative solutions. The Prize is accompanied by DKK 3 million: DKK 2.5 million for the Prize winner’s research and a personal award of DKK 0.5 million.

The Prize is awarded for a predominantly European contribution. Prize winners must be employed at a public or non-profit research institution in a European country. They can have any nationality. The Novozymes Prize Committee awards the Prize on behalf of the Novo Nordisk Foundation based on nominations received. Anyone may nominate a candidate for the Prize.