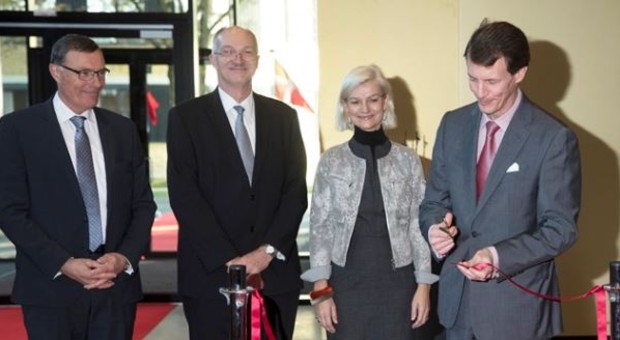 The red carpet was rolled out for Prince Joachim of Denmark, Ulla Tørnæs, Denmark’s Minister for Higher Education and Science, and other dignitaries on Thursday. They were guests of the Novo Nordisk Foundation Center for Biosustainability at the inauguration of its new building on the Lyngby campus of the Technical University of Denmark.

The newly constructed five-story building houses laboratories and a specially designed research centre that will establish the framework for the Center’s future research and development of cell factories for the sustainable manufacture of chemicals and medicines.

The Center was established in 2011 based on a grant from the Novo Nordisk Foundation, which has provided total support of DKK 1.1 billion (€150 million).

MINISTER CALLS IT A MILESTONE

Ulla Tørnæs congratulated the University on its new facilities and called the opening of the Center a milestone and an example of how much a public–private partnership can achieve.

Sten Scheibye acknowledged the Center’s results, before taking a look into the future quoting Winston Churchill : “We shape our buildings, and afterwards our buildings shape us.”

With press cameras flashing Prince Joachim of Denmark cut the ribbon. He was then given a guided tour of the new building while the 100 distinguished guests and the Center employees were invited to a reception.

Read more about the opening of Building 220 on the Center’s website here.