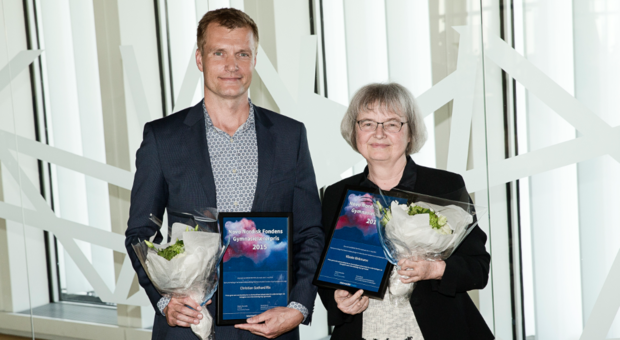 Vibeke Birkmann of Greve Gymnasium and Christian Gothard Rix of Rødkilde Gymnasium have been chosen as the recipients of this year’s Novo Nordisk Foundation Prize for Upper-secondary Schoolteachers. The Prize, which is accompanied by DKK 250,000, is for upper-secondary schoolteachers of biology, chemistry and biotechnology.

The Prize focuses on enhancing high professional standards in teaching the biological sciences in upper-secondary schools in Denmark and on recognizing the teachers who have contributed significantly to this teaching.

Vibeke Birkmann and Christian Gothard Rix are receiving the Prize for their committed efforts to put biotechnology on the agenda. Vibeke Birkmann is a driving force behind the holding of the 2015 International Biology Olympiad in Denmark, with participants from more than 60 countries. Christian Rix has had a gene-modified yeast strain approved that students can use in classes by for evaluating potential hormone-disrupting chemicals and for brewing beer.

Vibeke Birkmann says: “I am very proud and surprised. I am one of many who have worked hard during the past 6 years to make biotechnology a very exciting subject in upper-secondary schools both because this provides good general knowledge about one of Denmark’s most important export sectors and because we hope that we can inspire many young people to choose to study biotechnology.”

Christian Gothard Rix says: “I am extremely surprised and grateful to receive the Prize and I am also very pleased that some people think that I have done a good job. It is important for me to include some alternative investigative tasks in my teaching and to do some crazy and fun things that grab students’ attention and then compare the results with the scientific theory.”

Two prizes are awarded annually: one in eastern Denmark and one in western Denmark. A Prize committee established by DANSK BIOTEK (an association representing the biotechnology industry in Denmark) selects the Prize winners based on nominations from upper-secondary school principals in Denmark. The Novo Nordisk Foundation donates the Prize money, which consists of a personal award of DKK 50,000 and DKK 200,000 for the recipient’s school to be used for strengthening the teaching of biology, chemistry and biotechnology. This is the second year that the Prize has been awarded.

Birgitte Nauntofte, CEO of the Novo Nordisk Foundation, says: “Biomedical and biotechnology research is an important field for Denmark’s future. In awarding the Prize, we aim to reward upper-secondary schoolteachers who have made an exceptional contribution in motivating young people to take an interest in the biological sciences.”

Martin Bonde, Chair of DANSK BIOTEK and the Prize committee, says: “DANSK BIOTEK is convinced that the Prize is extremely important for ensuring that the next generation receives the best teaching and learning in biotechnology. This will enable the wider perspectives of biotechnology to be revealed fully, inspiring continuing work in the field. Upper-secondary schools in Denmark naturally play a crucial role in this process, and the Prize winners have especially made a difference by highlighting the many opportunities biotechnology offers.”

The Prize was awarded in a ceremony at the annual general meeting of DANSK BIOTEK on 5 May 2015.