Prize Recipient Has Uncovered the Relationship Between Brain and Gut

Asbjørn Mohr Drewes of Aalborg University Hospital is receiving the 2018 Hagedorn Prize for his pioneering research on pain and diseases of the digestive system. The Danish Society of Internal Medicine and the Novo Nordisk Foundation award the Prize, which is accompanied by DKK 1.5 million. 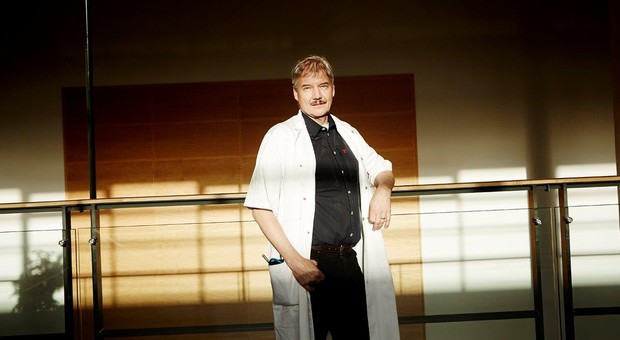 As a child, Asbjørn Mohr Drewes watched his father in amazement as he was completely absorbed by several boring graphs in connection with his doctoral thesis. The young Asbjørn was convinced that he would definitely never become a doctor and have such a boring job. But it turned out that he became one anyway.

“So I became a doctor, but I was never going to become a researcher. Nevertheless, it was rather exciting after all, and before I knew it I was also examining graphs. So I finally decided that I might as well not fight it,” explains Asbjørn Mohr Drewes, Chief Physician and Professor of Medical Gastroenterology.

Many people today are happy that this happened. Numerous people all over the world can thank Asbjørn Mohr Drewes for his pioneering research on understanding and treating such disorders as pain and disturbances in the movements and regulation of the digestive system. He is receiving the 2018 Hagedorn Prize for this outstanding and comprehensive work, among other achievements.

The Prize, accompanied by DKK 1.5 million, is awarded in recognition of excellent research or development efforts within internal medicine in Denmark.

THE NERVOUS SYSTEM AND THE BRAIN ARE LINKED

As Director of Mech-Sense: Centre for Pain and Gastroenterology Research at Aalborg University Hospital, Asbjørn Mohr Drewes has launched projects integrating basic, translational and clinical research. This means research that covers everything from the first laboratory test to the final clinical trials with patients. The research covers a very broad spectrum within diseases of the digestive system, and especially neurogastroenterology, which focuses on how the nervous system affects the gastrointestinal tract.

“Much of what we do is examining the function of the intestines among both healthy and sick people. How they move, called motility, and how this affects the brain. It is all linked, and although we are not conscious that our intestines move, they still send signals to the brain, which then responds to the signals and manages them to a certain extent,” explains Asbjørn Mohr Drewes.

Nervousness is a good example of how our brain and intestines are linked. Many people experience diarrhoea when they become nervous. This is relatively harmless, but its explains something about the link between the digestive system and the nervous system and thereby how complex gastroenterology is.

The Department of Gastroenterology and Hepatology at Aalborg University Hospital is one the world’s leading centres for treating pain, motility disorders and other complications of digestive diseases. Doctors are often unable to help many of these patients. Without really having any formal guidance, Asbjørn Mohr Drewes began very early in testing various methods and drugs. This was how the small department in Aalborg gradually became a pioneer in researching the physiological conditions and the complications that arise in internal organs.

A key focus is people with chronic pancreatitis (inflammation of the pancreas). Their greatest problem is that they often experience phantom stomach pain because the pancreas and thus the nerves are damaged. Diabetes can cause similar damage to the nerves in the gut. This is relatively new knowledge.

“We must adapt the treatment to the cause. We have carried out many clinical trials and have reached a higher level for treatment. In this sense we have become opinion leaders,” explains Asbjørn Mohr Drewes, who often teaches and gives lectures on treating pain and motility disorders both in Denmark and abroad. He is also behind the clinical guidelines that are used globally for treating pain in the gastrointestinal tract.

REASONS FOR RECEIVING THE HAGEDORN PRIZE

The reason for awarding the 2018 Hagedorn Prize to Asbjørn Mohr Drewes is his research of the absolutely highest international level. In addition, the Hagedorn Prize Committee has also strongly emphasized his high level of research activity.

Pia Nimann Kannegaard, Chair of the Danish Society of Internal Medicine, which selects the recipient of the Hagedorn Prize, says, “Asbjørn Mohr Drewes has an impressive list of publications and has supervised many PhD students. He is a key figure in the Danish Society of Gastroenterology and Hepatology and has a remarkable talent for entrepreneurship. He inspires younger colleagues and has launched many scientific and research projects.”

“I have written some articles and initiated a few things. But the structure in place at Aalborg University Hospital and in my department and the support from colleagues and management have enabled this by providing an excellent environment for research. Finally, the support of my family has been crucial.”

Co-founder and Director of Mech-Sense: Centre for Pain and Gastroenterology Research. The Centre is multidisciplinary, with 24 researchers covering 11 specialities, including complications of diabetes in the digestive system, pharmacology, neurogastroenterology and pancreatology.

The research of Asbjørn Mohr Drewes has led to 489 publications in the form of peer-reviewed articles, review articles and book chapters, including 58 publications in 2017.

He has established research collaborations worldwide and currently has active projects with researchers in 17 countries in Europe, Asia, Australia, India and the United States.

The Danish Society of Internal Medicine awards the Hagedorn Prize to recognize excellent research or development efforts within internal medicine in Denmark. The accompanying award of DKK 1.5 million includes a personal award of DKK 250,000 and an award for research or development work of DKK 1.25 million. The Prize also includes the Hagedorn Medal.