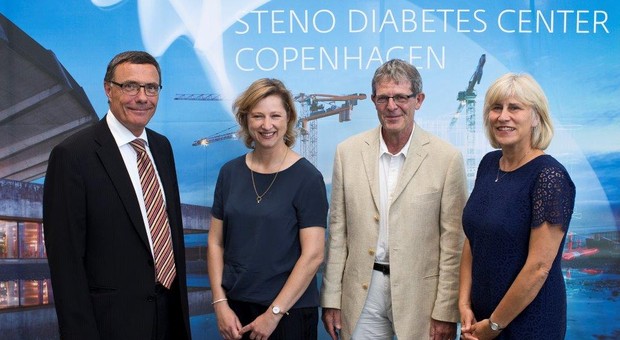 The agreement to establish the new Steno Diabetes Center Copenhagen at Herlev was celebrated on Friday, 24 June at a reception at the Novo Nordisk Foundation attended by 120 guests.

The Center will become a reality following a decision by the Regional Council of the Capital Region of Denmark and through a grant of DKK 2.945 billion (€396 million) from the Novo Nordisk Foundation to the Capital Region, which will own the Center.

“The Capital Region of Denmark, the Novo Nordisk Foundation and especially the talented employees of the current Steno Diabetes Center will now embark on a long journey involving several exciting years in jointly fulfilling the ambitions for world-class diabetes treatment and research,” he added.

Sophie Hæstorp Andersen, Chair of the Regional Council of the Capital Region of Denmark, also spoke. She said it was “a day of joy”.

“Our goal is a health care system that is based on each individual’s situation, preconditions, resources and motivation. I am therefore also very pleased that the vision the Capital Region of Denmark and the Novo Nordisk Foundation have produced together is based on the fact that we want to put people who have diabetes at the centre of everything we do. The key objective is that we can offer treatment and prevention at a top international level,” said Sophie Hæstorp Andersen, Chair of the Regional Council.

“We want our Center to be an intersectoral knowledge and education centre for health personnel,” said Sophie Hæstorp Andersen, who also spoke to the many employees who will switch employers: from Novo Nordisk A/S to the Capital Region.

“We are looking forward to having you onboard on 1 January 2017 and to welcoming you as colleagues.”

The exact location of the new Center was also announced at the reception: the current site of the Arkaden building of Herlev Hospital, which will be demolished.

Steno Diabetes Center Copenhagen will be northern Europe’s largest and most modern diabetes centre when it opens in 2020. The Center will innovate the treatment and prevention of diabetes by bringing together competencies under the same roof for the treatment, health promotion, research and education within diabetes.

“Steno Diabetes Center Copenhagen is a major milestone. But we are not stopping here. Ultimately, our goal is to expand the treatment of diabetes to the rest of Denmark so people in the other regions can also benefit from the extra treatment,” said Sten Scheibye.