Protein research will be incredibly important for human health, says American scientist Dr. Stephen Elledge, who gave a talk at PTMs In Cell Signaling – one of only a few conferences he attends this year. 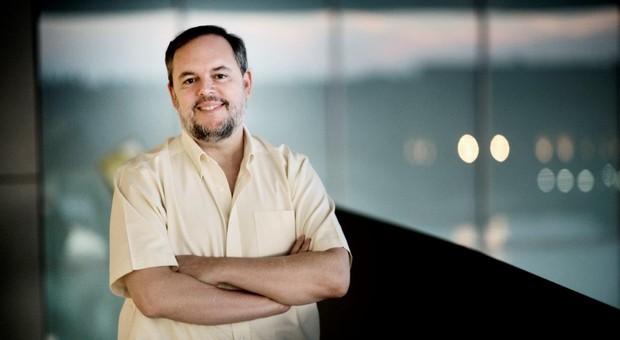 ‘- So I am going to have to go back to the meeting pretty soon. Is there anything else? Because I don’t want to miss Tony Hunter’s talk.

Stephen Elledge is accommodating and straightforward.

In the last years, the renowned American scientist has reduced his travel and meeting activity, so now that he is actually here, he wants to make the most of it.

– I don’t travel a lot. I come to Europe maybe once a year, once every two years. I could come almost once a month because there are lots of conferences and you get lots of invitations. But once I had kids, I cut down on my travels. I had a rule I would travel once a month, then it got down to once every two months. And that included all my trips in the US as well. Now that my kids are out of the house, I travel a bit more, and that is why I am here. I go to maybe three conferences a year, says Dr. Stephen Elledge

Why did you choose to come to this conference?

– Because Jiri (Lukas) asked me. I work on a lot of areas, and this particular conference is very broad. There are lots of different topics covered by the leaders in the field, so it has been a great conference, not to mention that this place is fantastic for a conference. I have had several ideas for collaborations since I came here. I really enjoyed it, he says, adding that this tour also includes a conference in Cologne with a trip to Cambridge in between.

A LEADER IN THE FIELD

Stephen Elledge is one the lead names of the conference – and in the field.

Based at the Department of Genetics, Harvard Medical School, Boston, United States, he works with understanding cell cycle control, the cellular response to DNA damage and how the proteome is remodelled by ubiquitin-mediated proteolysis. He also develops genetic technologies to assist in gene and drug discovery. Recently he has applied genetic and computational strategies to understand how aneuploidy drives tumorigenesis and how genetics can uncover vulnerabilities in cancer cells.

– If you want to understand how the cells work, what you really care about is the protein, he says.

With the technology constantly improving, Elledge sees a not too distant future in which proteins will play an important role as biomarkers for diseases.

– By characterizing proteins we will – by taking blood samples – maybe be able to detect all kinds of diseases and inflammation and different types of cancers and things like that before you are symptomatic.

– Some of the implications that are emerging – at this very meeting in fact – are clinical relevant biomarkers for disease. So people can know even before they actually get sick that they are tending or trending in a particular direction that may be problematic.

– When you go to the doctor, the doctor asks you various questions, and you try to answer to the best of your ability, but it is not always very clear. Then the doctor takes that information and tries to figure out what is wrong with you. But if you have a piece of scientific data that says that the proteins in your blood or your urine are different in a way that correlates with a particular known disorder, then that is going to be much more relevant than a doctor trying to interpret you fuzzy description of how you feel.

– So I think there is a huge future in this, and the researchers are heading towards it. I am very optimistic that this is going to turn out to be incredibly important for human health.

– Take now for example pancreatic cancer. By the time they find it, it has been doing bad things for such a long time that it is incurable and you die. But if they can find it 10 years earlier based on some signature in your proteome – that could be the proteins that are dumped into the blood as a cancer grows and cells die – that could be a diagnostic. And it is just a matter of finding those, knowing what to look for, and then you may be able to find a cancer early enough so that you can start treating it before it develops in terms of resistance and gets too big. Then you will have a much better diagnosis.

Stephen Elledge’s interest in science came at an early age and stem from reading booklets.

– It came from reading booklets called SRA, which were developed to get children interested in reading. There are different grades and I kept reading ahead. And one point I got to the part about science, and I read about dinosaurs – having never heard of dinosaurs, I was amazed and I wanted to be a paleontologist – and then outer space and finally atoms and molecules. I just loved it, so then I decided that I was going to be a chemist when I was probably ten years old. I went on to college and did a chemistry degree. It was all kindled by reading these booklets.

– The idea is that there is an underlying principle that explains reality basically, that explains the things you see and how they are built and how they interact. People that lived thousands of years ago had no idea about the basis of these things. Once you understand that it is all molecular then it becomes potentially understandable. For some reason I just thought that, that was the coolest thing ever.

Later Dr. Elledge got interested in genetics and microbiology, but he still has an affection for chemistry.

At PTMs in Cell Signaling, Stephen Elledge gave the first talk of the conference. The topic was DNA replication and cell cycle. On Wednesday afternoon, after almost three days of listening and debating science, he is excited about the conference.

– First of all, the speakers are very high quality. That is the most important thing. But the other thing – for me personally – is that it is very broad. It covers different tropics. You get to see how people, to whom you don’t talk to very often, think in a specific area. And that is how you expand your own ability to do science: By thinking in a different way. And so by having this rather broad conference – intellectually broad, topic-wise broad – I think the people that attend get more out of it. It is different ways of thinking about things, different ways of approaching problems. That’s why I like it.

Stephen Elledge was photographed in The Royal Danish Opera by Christian Als.