Taking the Next Step in Science

In addition to the lecture hall talks, the Data-Driven Biotechnology conference had several alternative session formats designed to enhance networking and knowledge-sharing. 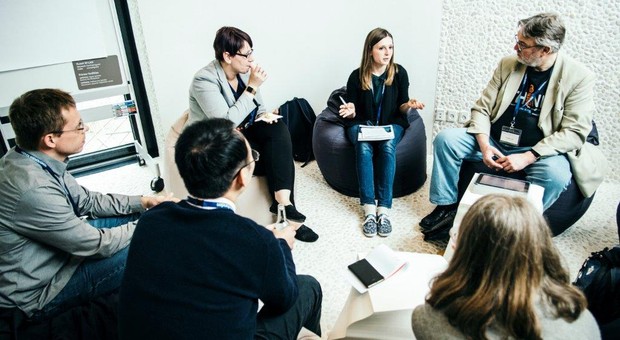 “To discover something new and translate this knowledge into new products to help people – I think that is the motivation for every scientist,” says postdoctoral fellow Biljana Mojsoska during a poster session.

In May, she was one of 180 participants at the conference Data-Driven Biotechnology, part of the Copenhagen Bioscience Conferences held just outside of Denmark’s capital city. The Conference brought together researchers from academia and industry to discuss some of the newest topics in the field.

“I think it is essential. I talked to several of the people from industry here. It is valuable, because you get an opportunity to ask questions about the translation of knowledge into industry: how they do it, what is important. You can get knowledge of things that you don’t learn in academia,” says Biljana Mojsoska, who is employed at Rigshospitalet, the largest hospital in Denmark.

One of those representing industry was Darren Platt from Amyris, an industrial biotechnology company based in the United States. He believes that a conference linking academia and industry is of mutual benefit.

“Industry research often has a more short-term focus. I like the idea that there is someone out there looking at the next problems. Academics tend to have a lot more freedom to talk about what they are doing and often have the opportunity to take on much higher-risk projects, and they are on the cutting edge. I saw a bunch of talks here with people doing very advanced things and I thought ‘oh, that is the future, that is what we’d like’,” he said and continued:

“Or we can help them. There was one academic here who had a really great idea, and I asked him if he was talking with pharma companies because they should be using it. He said no, they don’t believe in him, and I said you should be talking to this company because they are a bit more innovative. He said he didn’t know anybody there, and within five minutes I could e-mail some of the people in the innovation centre of that company and say ‘I think you people should talk.’”

He believes this type of conference will lead to more collaboration.

“I have been very impressed with the level of academic research presented here. You have picked people who have thought deeply about problems that are relevant to us and have interesting ideas. It will certainly lead to more collaboration. There are definitely people here that I will stay in touch with or maybe visit.”

The Conference was by hosted the Novo Nordisk Foundation Center for Biosustainability and the Novo Nordisk Foundation. Lasting 4 days, the Conference focused on using big data and models in biology and biotechnology. It focused specifically on addressing the challenges of converting the data collected in projects into scientific knowledge and ultimately to improve strains, cell lines or diagnostic tools. Twenty-two renowned researchers gave talks during the conference, with 17 up-and-coming researchers selected to give short talks.

One of the speakers was Kathryn Holt, who had travelled from Australia to participate. She was impressed with the level of science.

“When you live in Australia, you tend to have to travel a long way to go to conferences, but I haven’t been to Denmark before, and it has been very great to see the level of science and the diversity of biotech that they have here.”

“There have been some fantastic speakers across a very broad range of areas. I have learned a huge amount, and I am actually very excited to take some of the things that I have learned here back to integrate into my own research.”

“The conference is unlike any other I have been to. On the one hand, it is quite a large conference for such a focused topic, but on the other it is small enough so that you can actually talk to everybody and everybody has a chance to present. It has been really stimulating,” she said.

Another participant travelling a long way was Jay Keasling of the University of California, San Diego. He was back at the Copenhagen Bioscience Conferences after participating and giving a talk at a conference in 2013.

“The science has been fantastic. I have really enjoyed it and learned a lot – particularly this time. Four years ago, it was a conference much more in my area of expertise, and this time it a meeting that I don’t have a lot of expertise in, so I am learning a tonne of new things. I certainly hope to be back.”

In addition to the lecture hall talks, the Conference had several alternative session formats designed to enhance networking and knowledge-sharing. One of these was the round-table discussions, in which the 180 participants were divided into eight groups to talk about a specific topic, allowing more time for in-depth discussion.

To further enhance networking opportunities, all participants had committed to being present at the conference venue during the entire 4 days. Emma Lundberg, Associate Professor at KTH Royal Institute of Technology in Sweden, found this aspect especially appealing.

“It is a great conference. Everyone is here the whole time, and in that sense the conference has been perfect for making new contacts and possible collaboration partners.”

Back at the poster session, Biljana Mojsoska was enjoying herself: ”It has been a great conference. I have made new contacts and learned a few tips and tricks from the industry people I met. Hopefully I can benefit from that in the future.”