In Denmark, contestants are also invited for an extra category of Robot Sumo in which two robots try and push each other out of the ring, similar to a normal sumo wrestling bout. However, this category does not qualify for the World Robot Olympiad finals. 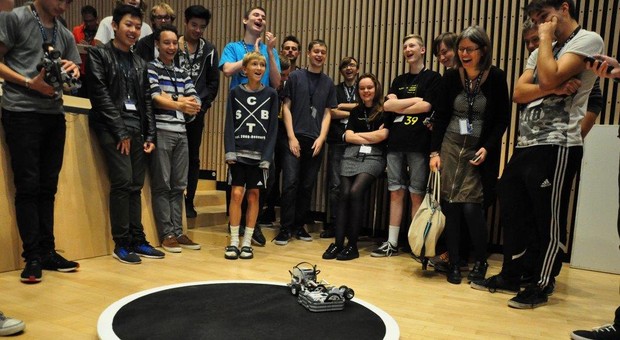 The Novo Nordisk Foundation has awarded a grant of DKK 150,000 to Aarhus University for hosting and preparing for the Danish finals of the World Robot Olympiad.

The finals are being held on Saturday, 1 October in Katrinebjerg, Aarhus. The winner will represent Denmark at the World Robot Olympiad 2016 in Delhi, India in November 2016.

In the World Robot Olympiad, 16- to 25-year-olds compete in constructing and programming robots. Building and programming improves the students’ innovative, creative and problem-solving skills. One thing the contestants will do is to build a robot that can play 10-pin bowling. The idea behind the competition is to bring together young people from all over the world to develop their creativity and proficiency in design and programming through challenging and educational robotics competitions and activities.

In addition to being a competition about knowledge and technical skill, the World Robot Olympiad aims to help more young people take an interest in science and technology and to choose an educational programme within this field in the long term.

By participating in the international finals, the Danish team will also help draw attention to Denmark’s abilities in relation to robot technology, innovation, education and research.

“This is the 11th time that we have held the Danish finals, and every other year we send talented young people to represent Denmark at the international finals. The Danish team generally does well internationally, and I would suggest that Denmark is one of the leaders in spawning talents in technology, design and science,“ says Ole Caprani, Associate Professor at the Department of Computer Science of Aarhus University, which is hosting the competition.

The World Robot Olympiad was founded in 2003 and now holds qualifying rounds in more than 50 countries with at least 20,000 teams participating, equivalent to about 60,000 young people. Denmark competed for the first time in 2006.