Being fit is healthy and being fat is not. No news there. Nevertheless, science shows that genes, and sometimes even the same genes, can predict both fitness and fatness. New Danish research suggests that our percentage of body fat – and not our muscle mass – mostly determines whether we can become fit (Photo: Shutterstock). 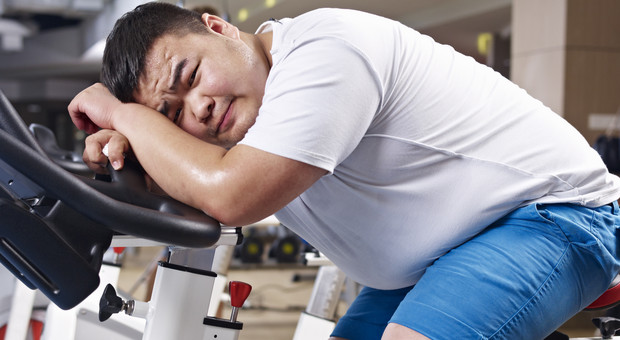 Being fit is healthy and being fat is not. No news there. Nevertheless, science shows that genes, and sometimes even the same genes, can predict both fitness and fatness. New Danish research suggests that our percentage of body fat – and not our muscle mass – mostly determines whether we can become fit.

Christmas in Denmark can be a happy time, but like the snow we fall for Christmas food and sweets. Then, in January, people diet and go running. A perennial discussion point, also in science, is whether fitness or belly fat is more important for long-term health. Now Danish researchers have shown that they are the same thing in part – at least genetically.

“We already knew that being predisposed to obesity is associated with 12 specific areas of our genes and that being fit is also linked to our genes. What is new about our study is that we are the first to show a direct genetic link between body fat percentage and fitness. So if you are genetically predisposed to obesity, you are probably also predisposed to being less fit,” explains Theresia M. Schnurr, the lead author of the study and a PhD student at the Novo Nordisk Foundation Center for Basic Metabolic Research at the University of Copenhagen.

FAT IS THE DECIDING FACTOR

The researchers thoroughly analysed the height, weight and body fat percentage of the 230 members of 55 families in Denmark. The researchers measured the maximal oxygen uptake of all family members to determine their physical fitness. Lastly, all the data were examined to determine whether genes, body fat percentage and physical fitness were correlated.

“We found very significant genetic factors linked to both the propensity to become obese and general physical fitness. The results suggested that genetics can explain at least half the population’s variation in body mass index, body fat percentage and physical condition, with environmental or other factors accounting for the other half.”

Nevertheless, the researchers were surprised that the participants’ body mass index, physical fitness and genes were not associated.

“We had assumed that the muscle mass of the participants would be associated with their physical fitness, but it was not. In contrast, their body fat percentage, physical fitness and genes were very clearly correlated.”

How fitness and fatness interact in the human body is not yet known with certainty. However, the Danish researchers have theories on how fatty tissue can influence physical fitness.

“We had seen how highly trained athletes such as cyclist Jan Ullrich had problems keeping their weight low and thereby staying fit. Shedding the extra weight immediately enabled him to cycle faster. Our theory is that fatty tissue expresses several substances and factors that affect the body’s physiology by directly influencing the uptake of oxygen,” explains associate professor Tuomas Oskari Kilpeläinen.

Although the researchers still have far to go to prove their theory, the new study is an important step. Even though much time will pass before this knowledge can be applied, The resarchers sees huge potential.

“If we can find out how fitness and fatness are genetically linked, we can also screen to determine which people are predisposed to being obese and thereby help them early. Each person’s individual genetic profile will presumably also be able to determine the ideal combination of diet and physical activity to ensure a good, healthy and long life.”