“The Scientific Level in the Poster Room Was Very High”

PostDoc Cristina Garcia Cácares, Technische Universität München, Germany, was one of the two winners of the poster competition. 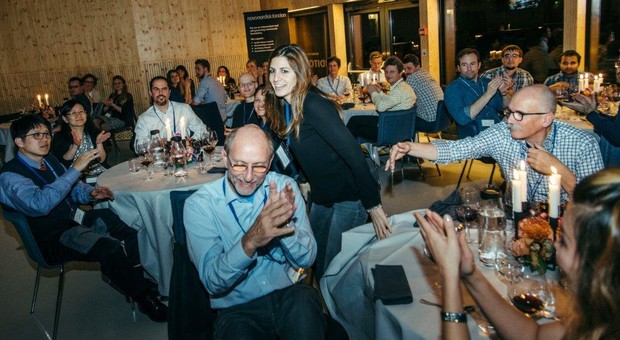 Selecting a winner of the poster competition at “Nutrient and Metabolite Sensing”, the latest conference in the Copenhagen Bioscience Conferences series, turned out to be quite a challenge.

There were so many good candidates that watching the jury at work was almost like hearing the numbers being called in a game of bingo.

“I like 79. It was going opposite from what everyone says. It was very provocative,” said Professor Eric Verdin, Gladstone Institutes, San Francisco, United States.

Both were part of the eight-person jury comprising conference speakers and elite scientists.

Every conference participant had been asked to bring a poster to present at the conference, with a number given to each person wishing to participate in the poster competition.

COULD HAVE USED ANOTHER DAY

Professor Helen Cox, King’s Collage London, United Kingdom, said there were about half a dozen posters she liked, adding that the difficulties in selecting a winner was a testament to the high level of science presented at the conference.

“On an international level – and I look at posters on a daily basis – the scientific level in the poster room was very high. I could have used another day walking around looking at them,” said Helen Cox.

The winners were announced at the dinner on the final evening of the conference.

“It means a lot to me,” said Konstantinos Polyzos afterwards.

“It is not so much the award I received, but the recognition of our research and the feeling that the research that we do may have impact. This means that we are one the right track,” he added.

Regarding the poster by Cristina Garcia Cácares, the jury stated that it had a nice layout and praised her for her presentation. The Spanish researcher said afterwards that winning the competition was “a motivation to continue doing research.”

“Nutrient and Metabolite Sensing” was the 8th edition of the Copenhagen Bioscience Conferences – a series of scientific conferences within biomedicine and biotechnology bringing together some of the world’s top researchers and young talent to discuss the latest scientific results and hottest topics within a particular field. To promote a relaxed, trusting and open atmosphere, each conference is limited to 150–200 participants.

The next conference focusing on stem cell research takes place in May 2016.

Konstantinos Polyzos is congratulated by Susanne Mandrup and Vincent Poitout of the prize committee.

The conference had two poster sessions with plenty of activity.

Nutrient and Metabolite Sensing was held in Hillerød north of Copenhagen 1-5 November 2015.