Scientists receive prestigious prize from the Novo Nordisk Foundation in recognition of their decades-long tremendous research and development efforts and impact on people’s lives and society. 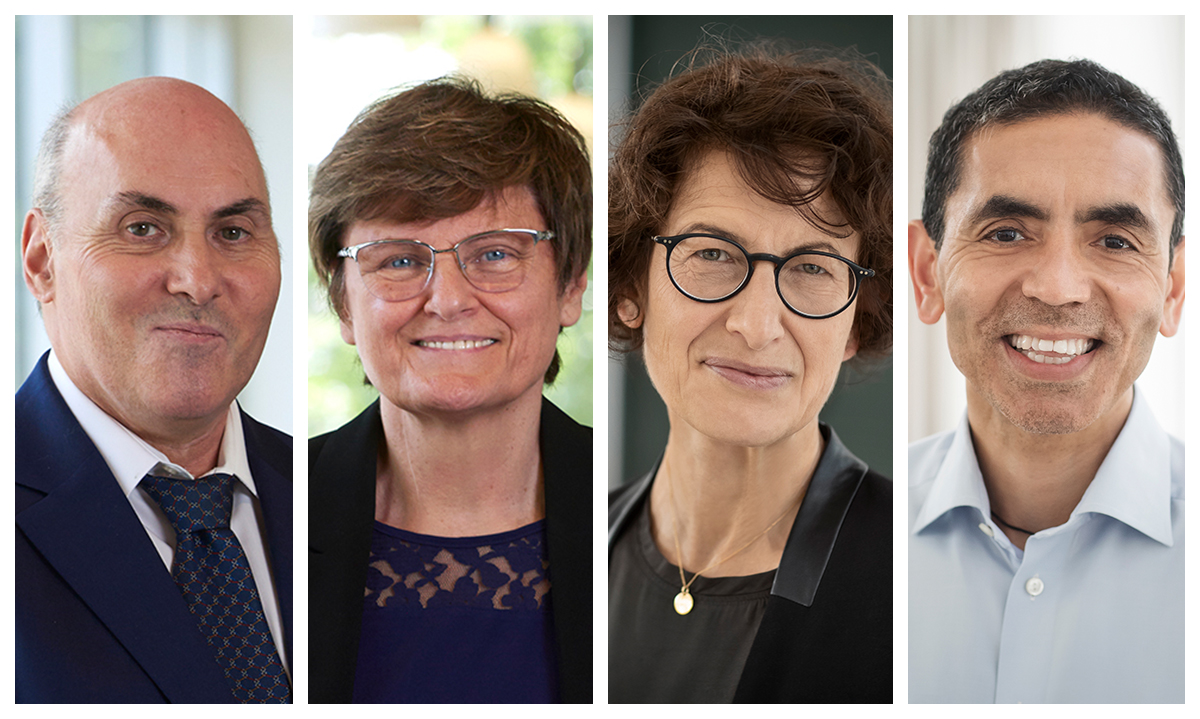 The Novo Nordisk Foundation is awarding the Novo Nordisk Prize to pioneering researchers Professor Katalin Karikó, Professor Drew Weissman, Professor Uğur Şahin and Dr. Özlem Türeci for their scientific discoveries and development, which led to the approval of the first COVID-19 mRNA vaccine.

The scientists have played instrumental roles in basic research and the development of the mRNA vaccine from BioNTech, which has proven 95% effective against COVID-19 and has become a decisive factor in overcoming the pandemic. By the end of the year, more than 1 billion people worldwide will have been vaccinated with the vaccine.

The mRNA technology on which the vaccine is based also holds promise for future vaccines and treatments for a wide range of diseases, including cancer and genetic diseases.

“With the awarding of this Prize, we pay tribute to the people behind one of the most exceptional achievements of our time – in which scientific discoveries through the past two decades have led to the development of a vaccine with incredible speed. The mRNA vaccines have already prevented thousands of COVID-19 related deaths among people all over the world,” says Mads Krogsgaard Thomsen, CEO of the Novo Nordisk Foundation.

Jørgen Frøkiær, Chair of the scientific committee that awards the Novo Nordisk Prize, says: “The awarding of the Prize underlines Louis Pasteur’s famous words that ‘chance favours the prepared mind’. The decades-long dedicated work of these four scientists in the field of mRNA significantly contributed to a well-tolerated and highly effective COVID-19 vaccine. When the COVID-19 pandemic emerged in spring 2020, Uğur Şahin und Özlem Türeci realized immediately that the technology could create the vaccine that could save humanity from the grip of the pandemic. With their unique scientific contributions and the responsible entrepreneurship, the first mRNA-based vaccine was born. It opened the door to a new and revolutionary technology – a completely new type of vaccine that could turn life-threatening diseases upside down over the coming years.”

The Novo Nordisk Prize is awarded to honour active scientists who have provided outstanding contributions to advance medical science to benefit people’s lives. The Prize is accompanied by DKK 5 million.

Pioneering forces
Professor Katalin Karikó, Senior Vice President at BioNTech and Adjunct Professor of Neurosurgery at the Perelman School of Medicine at the University of Pennsylvania and Drew Weissman, the Roberts Family Professor of Vaccine Research at the Perelman School of Medicine, have been pioneering forces for more than a decade in discovering a nucleoside-modified form of mRNA.

Professor Uğur Şahin and Dr. Özlem Türeci have made scientific and technological breakthroughs in the past two decades, originally designed to unlock the full potential of this molecule for the development of mRNA-based cancer vaccines. Their pioneering work includes the discovery of modifications in the mRNA backbone that improve the amount and duration of mRNA-encoded protein production in human cells and the discovery of lipid envelopes that improve the potency and immunogenicity of mRNA vaccines.

The COVID-19 vaccine, developed in the laboratories at BioNTech’s headquarters in Mainz, Germany, is based on decades of research and achieves its high efficacy and good tolerability by combining the discoveries of the four scientists. The vaccine was approved by several health authorities worldwide, including UK, USA and EU, within an unprecedented 8-month period since WHO declared COVID-19 to be a pandemic.

Recipients: science can make a difference
Katalin Karikó says: “It is a great honour to receive the Novo Nordisk Prize with my colleagues Drew Weissman, Özlem Türeci and Uğur Şahin. Sharing the spotlight with them makes this Prize extra special. As a result of our joint scientific efforts over many years, a safe and very effective COVID-19 mRNA vaccine was developed.”

Drew Weissman says: “I would like to thank my co-recipients and all of the scientists involved in mRNA, LNP, and basic science research that has made the vaccines possible.”

Uğur Şahin says: “The Prize represents what is key in the research and development of breakthrough technologies. It emphasizes that various discoveries and many inventions are needed to develop a new class of drugs powerful enough to fight serious diseases. The collaboration during the pandemic between scientists, organizations and companies around the world and the lessons learned are an excellent basis for the development of future innovations to improve people’s health.”

Özlem Türeci says: “The development of the first mRNA-based vaccine has shown that science can make a difference. It also underlines that decades-long basic research by scientists around the world and billions of investments are necessary to invent and optimize technologies that can improve the lives of many. I would like to thank the co-recipients of the Prize as well as all scientists who dedicate their work to find better ways of preventing and addressing diseases.”

The four researchers are receiving the 2022 Novo Nordisk Prize. The Novo Nordisk Foundation has decided to advance the announcement of the 2022 Prize in recognition of the importance and impact of the work of the four recipients in the current pandemic.

The recipients will officially receive the Prize at a ceremony in Copenhagen, Denmark on 1 April 2022.

Years of effort
The story of the mRNA technology and development of the vaccines is also the story of dedication, perseverance, reactivity and exceptional entrepreneurial skills.

Katalin Karikó and Drew Weissman worked together for many years at the University of Pennsylvania. Convinced of the potential of mRNA therapies, they overcame widespread scepticism and many years of setbacks and developed the nucleoside-modified mRNA technology that both Pfizer-BioNTech and Moderna later used in developing their COVID-19 vaccines.

The key discovery that the use of nucleoside modifications suppresses recognition of mRNA by the innate immune system, published in 2005, was a major step forward. Initially, Katalin Karikó and Drew Weissman were most interested in using this technology for the in vivo delivery of therapeutic proteins. However, as the technology showed more promise, interest in other applications, including vaccines, grew.

Uğur Şahin and Özlem Türeci explored how mRNA vaccines could be improved to become potent enough to trigger effective immune responses capable of shrinking existing cancer masses. Through years of research, they solved the fundamental mRNA-associated problem of low and short-lived protein production in a different way than Katalin Karikó and Drew Weissman. Prior to founding their company, they discovered several modifications of the mRNA backbone that, when combined, strongly improved the amount and duration of mRNA-encoded protein production in human cells. With the results of this work first published in 2006, they emerged as winners of a nationwide competition of the German Federal Ministry of Education and Research that same year, which led them to found their company BioNTech in 2008.

In 2013, BioNTech invited Katalin Karikó to give a lecture in Mainz, Germany about her patented technology for making non-inflammatory mRNA. A scientist at heart, Uğur Şahin was impressed by the technique and, as an entrepreneur, he appreciated its vast potential.

Realizing the potential of combining their efforts, the like-minded scientists decided to work together. Katalin Karikó joined BioNTech as Vice President in 2013 to support the company’s nucleoside-modified mRNA work. In 2014, they jointly published a landmark review on the development of mRNA drugs that serves as a guide for many mRNA researchers even today.

When the pandemic was declared in 2020, Uğur Şahin and Özlem Türeci, in agreement with the BioNTech management, initiated Project Lightspeed, BioNTech’s effort to accelerate the rapid development and distribution of a vaccine in collaboration with Pfizer. Özlem Türeci led the clinical development of Project Lightspeed, a historic achievement completed in less than 1 year.

Today, more than 1.7 billion doses of COVID-19 mRNA vaccines have been delivered worldwide, showcasing what can be achieved by bridging science and technology.

About Katalin Karikó
Born in 1955 in Szolnok, Hungary

2005: Key discovery with Drew Weissman on modifying the mRNA to be suitable for disease treatment

About Drew Weissman
Born in 1959 in Lexington, Massachusetts, USA

1990: Fellowship at the NIAID/NIH under the supervision of Anthony Fauci

2005: Key discovery with Katalin Karikó on modifying the mRNA to be suitable for disease treatment

2020: Development of the first mRNA-based vaccine approved for use against COVID-19

About Özlem Türeci
Born in 1967 in Siegen, Germany

2020: Development of the first mRNA-based vaccine approved for use against COVID-19

The Prize is awarded annually and is intended to further support biomedical research in Europe.

The Foundation will award an additional DKK 0.5 million for hosting an international symposium within the recipient’s field(s) of research.