Humanitarian partnership to mitigate the impact of COVID-19 among refugees

Jordan is one of the countries with the most Syrian refugees. Many of them live a life on the margins, and their health and finances are challenged as a result of COVID-19. The Novo Nordisk Foundation is collaborating with UNICEF and the Danish Refugee Council on two projects to help Syrian refugees through the tough times. “This is a crisis within a crisis,” says Charlotte Slente, Secretary General of the Danish Refugee Council, who emphasizes the importance of also helping internationally during the COVID-19 pandemic. 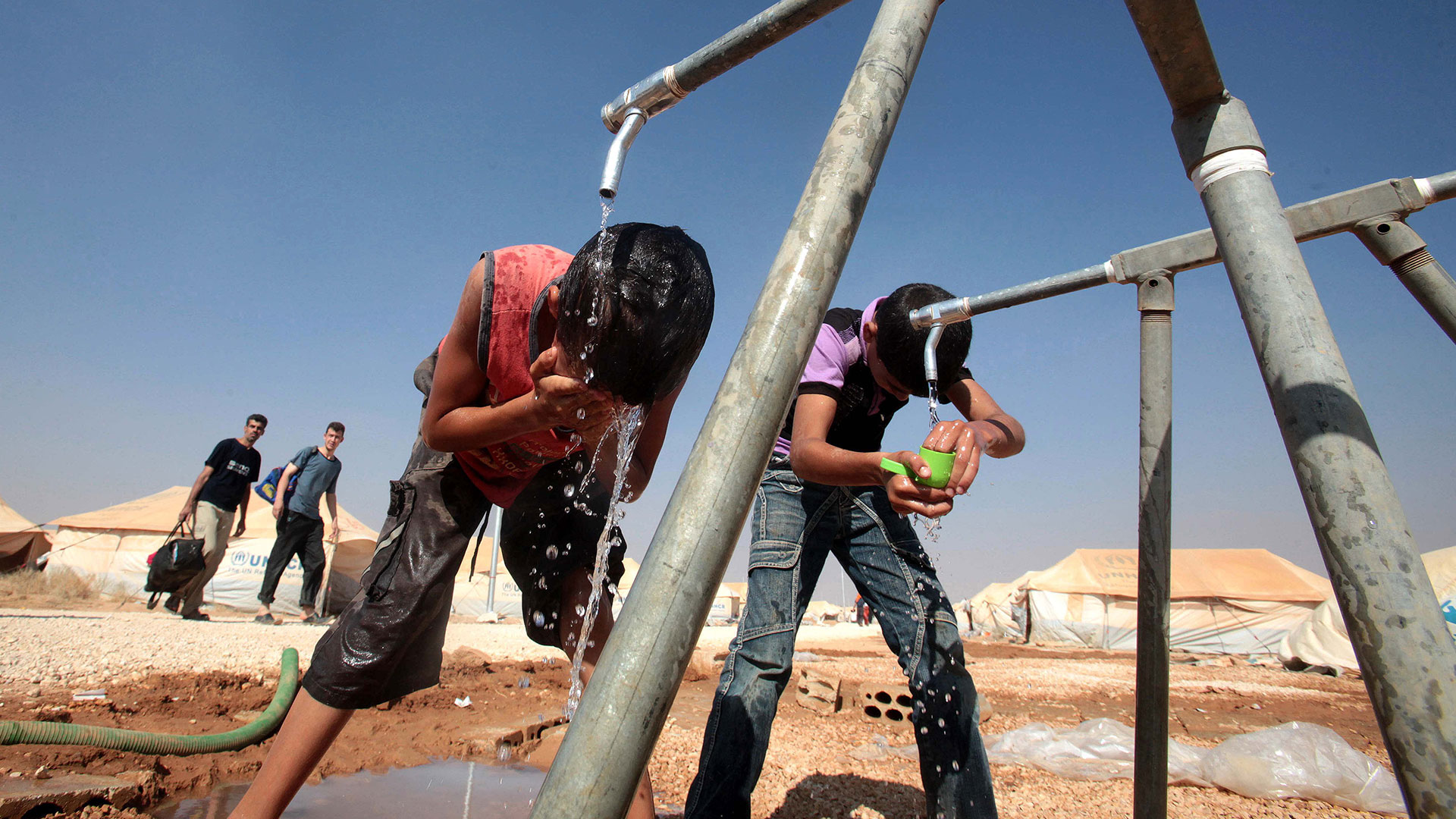 Many of the 650,000 Syrian refugees in Jordan live on overcrowded conditions. Five people often share 10 square metres. In a highly contagious pandemic, this is especially unsuitable, and the situation is further aggravated by the fact that Jordan has very scarce water resources. Many residents can only fill their water tanks once a week, and the country’s many Syrian refugees depend on water delivered to the camps by large trucks.

“The advice we get here in Denmark about washing hands, maintaining good hygiene and maintaining physical distancing is really hard to follow in a refugee camp like Azraq in Jordan, where access to water is limited and you share bath facilities with 200 other people,” says Susanne Dahl, Director of Programmes and Partnerships at UNICEF, which has received DKK 5 million from the Foundation for a project to mitigate the impact of COVID-19 on Syrian refugees in Jordan.

Refugees lose their jobs from one day to the next
Some of the Syrian refugees in Jordan live in the refugee camps, but the vast majority live outside the camps – many in apartments in Amman, the capital. Many of the refugees have lived in Jordan for many years, and the luckiest of them have a job that enables them to provide for their families. However, these jobs are often in the informal sector, and the effects of the pandemic are therefore especially harsh. Like many countries in the rest of the world, Jordan was also in lockdown, causing many of the Syrian refugees to lose their irregular jobs from one day to the next.

“These are people in crisis, and families have few reserves to draw on. They often sold what they owned in connection with fleeing. Many also find that the money that family members in other countries send is decreasing,” says Charlotte Slente from the Danish Refugee Council, which – like UNICEF – has received DKK 5 million in project support from the Foundation.

The Danish Refugee Council carried out a survey of 867 refugee families in Jordan about their situation. This highlighted the fact that, before COVID-19, 65% of the families had a family member in work. This figure fell to 3% after the lockdown.

Close collaboration enables us to act quickly
Before COVID-19, both UNICEF and the Danish Refugee Council collaborated closely with the Novo Nordisk Foundation on other projects targeting Syrian children and young people in Jordan. The organizations and the Foundation therefore already knew each other really well.

Hanna Line Jakobsen, Senior Vice President, Social & Humanitarian at the Novo Nordisk Foundation says: “COVID-19 is a global pandemic. It is therefore important that we also remember to give priority to international development work and provide support in countries where healthcare and society as a whole are vulnerable under the pressure of the consequences of COVID-19. UNICEF and the Danish Refugee Council have a presence both inside and outside the camps, where they are already doing a fantastic job for Syrian refugees in Jordan. With these grants, we can help ensure the best opportunities to mitigate the impact of COVID-19 on these vulnerable groups.”

Applying for grants from a foundation is usually a lengthy process. In the context of COVID-19, the money was made available to benefit Jordan’s refugees in a few weeks.

“We are deeply grateful to the Novo Nordisk Foundation for this confidence and for the prompt response. The key to the success has been that we had already built a solid and trusting partnership. At a time when many other foundations are focusing exclusively on national issues, the Novo Nordisk Foundation has demonstrated its community spirit and external outlook by also supporting an international project,” says Susanne Dahl.

Clean water and healthy children
UNICEF is using the funds from the Foundation to supply water to 130,000 children and families in the refugee camps. Soap, hand sanitizer, water purification tablets and cleaning supplies will also be supplied to 24,000 people.

“This kind of help makes a world of difference for children and young people in the refugee camps. They now have enough water to maintain good hygiene. In addition, if they get sick, they can go to a health post, where the staff members have personal protective equipment,” says Susanne Dahl.

UNICEF has also launched an awareness campaign to provide health messages to 200,000 children and their family members. UNICEF already worked in the camps where, among other things, they provide alternative education opportunities at their Makani centres. Due to COVID-19, the 150 centres have been closed down and there is instead distance learning via WhatsApp. UNICEF has communicated health information and guidance through channels like these.

“Many Syrian refugees already have chronic diseases. Now, they are having an even harder time accessing healthcare and being able to afford medicine,” says Charlotte Slente.

The Danish Refugee Council has therefore decided to use the funds from the Foundation to provide financial assistance and to distribute hygiene packages to 1,350 families, most of whom have chronically ill family members.

“The Novo Nordisk Foundation’s support makes a huge difference. For many of those we help, it means the difference between being able to survive or not – avoiding being thrown out on the street, being able to buy medicine and putting food on the table,” says Charlotte Slente.

Normality suspended globally
The Danish Refugee Council thinks that the trend in Jordan also applies to refugees in the rest of the world.

“This is a crisis within a crisis. The refugees are already in a vulnerable situation, which is now deteriorating in many ways. If they become infected with COVID-19, they are at extra risk because they live in overcrowded conditions with inadequate sanitation facilities. They are living on the margins of society, so they may be subject to further stigma. In addition, the national authorities may not have included them in their action plans. Above all, there is an economic crisis that will affect the world’s most vulnerable people – including refugees and displaced people,” says Charlotte Slente.

“Children are undoubtedly also victims of the worldwide pandemic. They may not be the ones most affected by the virus itself, but still, children are particularly at risk when families lose their incomes, schools remain closed and routine health initiatives are postponed. The resulting effects hit the kids really hard,” says Susanne Dahl.