The grant aims to attract excellent international researchers within biomedicine and biotechnology to Denmark, thereby strengthening research in Denmark in both the short and long term. 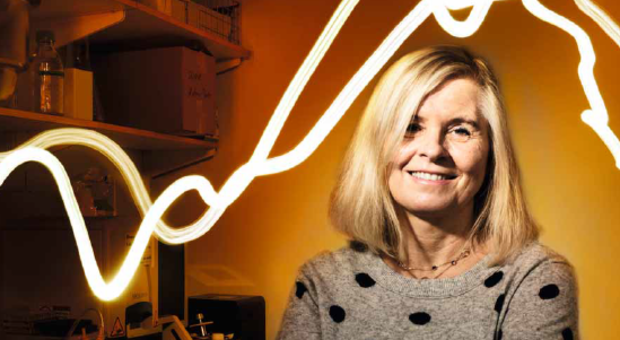 Most people love pulling the covers up to their ears, closing their eyes and settling in for a good night’s sleep. But sleep can also be considered a waste of time – and even dangerous when people slept in the savanna with wild animals prowling in the dark.

– Sleep is a dangerous activity when you are out in the open, says Maiken Nedergaard, a professor at the University of Rochester Medical Center in the United States.

She has been leading a research project on the function of sleep.

– Sleep must have a basic evolutionary purpose, because otherwise it would have been eliminated.

Maiken Nedergaard is one of the most renowned names in neuroscience. One of her discoveries is that, similarly to the lymph system helping the body to eliminate waste products after physical exertion, the brain has a system in which glial cells ensure that cellular waste products are elimi nated. Maiken Nedergaard has recently demonstrated that this waste clearance is far more effective during sleep, thereby revealing a possible essential function of sleep: keeping the brain in tip-top condition.

– The next step is to determine how important this transport system is for disease. We already have data showing that waste clearance from the brain is dramatically reduced after minor strokes or brain injury. This might explain how these diseases promote dementia, she says.

In 2013, Maiken Nedergaard is one of three researchers receiving a Novo Nordisk Foundation Laureate Research Grant for DKK 40 million (€5.5 million) over 7 years. These grants are awarded to excellent researchers who want to move their research to Denmark.

FROM THE UNITED STATES TO DENMARK

The grant means that Maiken Nedergaard is moving from the United States to Denmark and will be employed at the University of Copen hagen. Her research will focus on further exploring the functioning of glial cells, with the goal of developing new diagnostic and therapeutic methods of treating diseases of the nervous system.

– The grant from the Novo Nordisk Foundation will allow me to pose questions of even greater importance in the projects that are most exciting, says Maiken Nedergaard.

One remaining question is whether the function of sleep can eventually be understood so well that it can be mimicked in a waking state, thereby eliminating the need for sleep. However, Maiken Nedergaard says that this is simply – well, a dream. Lars Fugger, Chair of the Committee on Novo Nordisk Foundation Laureate Research Grants, says:

– Denmark benefits by being able to attract researchers of the calibre of Maiken Nedergaard. The presence of the best international researchers will raise the quality of Danish research and will also develop and inspire young talents.