The development of new technologies for biological wastewater treatment is turning our view of sludge upside down. According to Dutch environmental biotechnologist Mark van Loosdrecht, treating wastewater will become good business in the future. He is now receiving the 2022 Novozymes Prize for his pioneering work in copying and reusing nature’s mechanisms in wastewater treatment and resource recovery – transforming sludge into valuable resources. Photo: Marcel Krijger 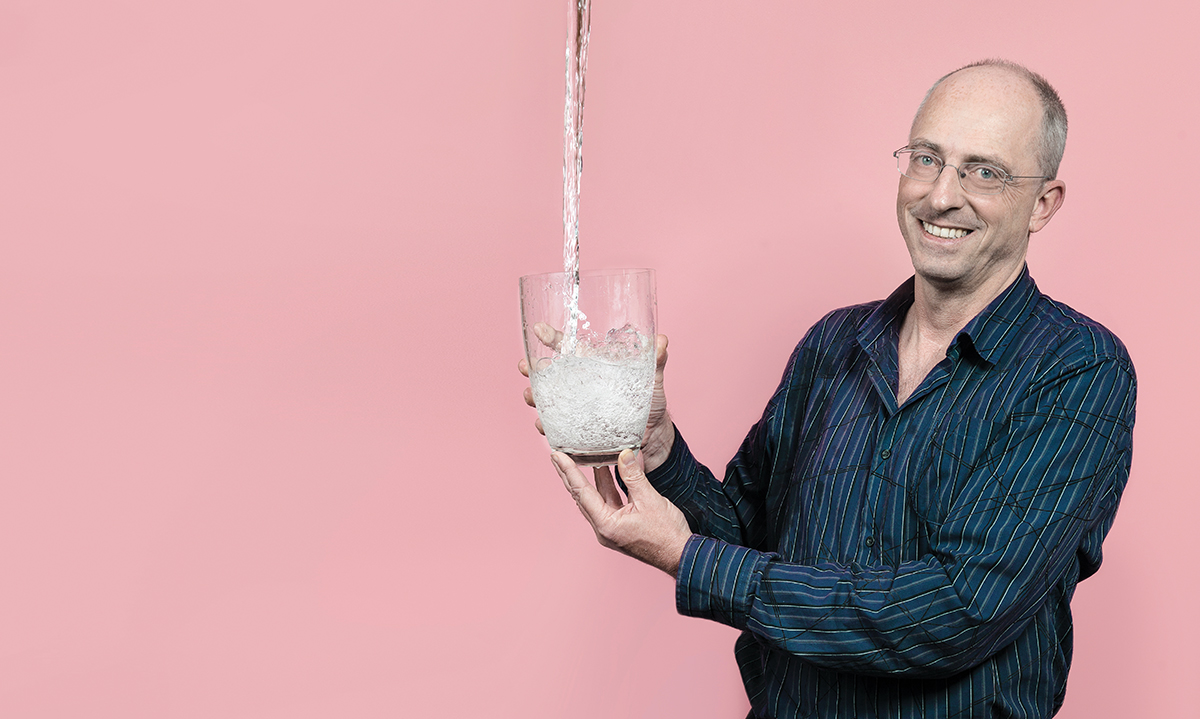 Today, only about two thirds of the world’s population are guaranteed clean drinking-water. Fortunately, this percentage is rising. However, global challenges such as pollution from chemicals, climate change with droughts and floods, increasing urbanisation and lack of investment in infrastructure, including wastewater treatment, are threatening this trend. The demand for water has never been greater, and water has therefore never been higher on the political agenda.

For decades, the focus in wastewater treatment has primarily been on developing even better physical and chemical methods, but Dutch microbiologist Mark van Loosdrecht has taken a different perspective and focused on the biological aspects – with great success.

Throughout the last 25 years, Mark van Loosdrecht and his team have developed a series of new wastewater treatment processes, taking advantage of nature’s own principles in wastewater treatment and resource recovery. The purpose of his work is to create healthier natural water ecosystems, a more sustainable circular economy and better balance in nature for the benefit of millions of people all over the world.

“I try to understand the bacteria and their interactions and, with their help, try to recover all the valuable nutrients from the wastewater. Wastewater treatment can therefore actually become good business rather than an increasing expense for countries globally,” explains Mark van Loosdrecht, Professor in Environmental Biotechnology at Delft University of Technology, the Netherlands.

For his outstanding contributions, Mark van Loosdrecht is being awarded the 2022 Novozymes Prize.

The Prize is awarded to recognise outstanding research or technology contributions that benefit the development of biotechnological science for innovative solutions. The Prize is accompanied by DKK 5 million and is awarded by the Novo Nordisk Foundation.

Bernard Henrissat, Chair of the Committee on the Novozymes Prize, says: “Professor Mark van Loosdrecht’s achievements have had an enormous impact in environmental biotechnology. He has developed biological processes that could efficiently remove environmental pollutants, and full-scale reactors based on Mark’s research and design are in operation or under construction on almost all continents. His innovations and inventions have revolutionised wastewater treatment and resource recovery, and he is a very deserving recipient of the 2022 Novozymes Prize.”

Mark van Loosdrecht says: “I am grateful and honoured to be receiving the Novozymes Prize and thereby follow in the footsteps of the great scientists to receive the Prize before me. I would like to thank my team and colleagues without whom I wouldn’t have been able to be where I am today.”

In the following years, while SHARON and ANAMMOX® plants were implemented worldwide, Mark van Loosdrecht took wastewater treatment to the next level by studying other natural microbial processes in sludge.

“When bacteria grow together, they can make very fluffy structures, as in conventional wastewater treatment, or compact structures that much more easily separate from the cleaned water. Coincidentally, the phosphate-removing bacteria are such bacteria. We thereby converted the activated sludge into small granules that contain various layers of these bacteria trained to perform a specific function,” says Mark van Loosdrecht.

The big advantage here was time. The smoother and denser bacterial granules settled at 1 metre in less than 5 minutes compared with 1 metre per hour for conventionally sludge. The researchers dubbed the technology Nereda® – derived from the Nereids, mythical Greek water nymphs.

Although the vision of Mark van Loosdrecht and his colleagues in Delft of turning sludge into economically profitable resources has not yet been achieved, they are now closer to realising their long-standing dream. By analysing the Nereda® granules, they have discovered several substances with a possible market potential such as Kaumera Nereda® Gum, a sustainable biopolymer.

“There is already a market for this biopolymer, which in combination with clay has proven to be comparable to some of the existing fibre-reinforced plastics – and with even better fire-retardant and heat-resistant properties. The material is actually so attractive that a colleague has started making jewellery from Kaumera Nereda® Gum. Its beautiful pearly lustre can remind us of things that can be made from what we flush down the toilet,” concludes Mark van Loosdrecht.

Mark van Loosdrecht will officially receive the Novozymes Prize at a prize ceremony in Bagsværd, Denmark on 1 April.

About the Novozymes Prize

The Prize is awarded to recognise a pioneering research effort or a technological contribution that promotes the development of biotechnology science to generate innovative solutions. The Prize is accompanied by DKK 5 million: DKK 4.5 million for the Prize recipient’s research and a personal award of DKK 0.5 million.

The Prize is awarded for a predominantly European contribution. Prize recipients must be employed at a public or non-profit research institution in a European country. They can have any nationality. The Committee on the Novozymes Prize awards the Prize on behalf of the Novo Nordisk Foundation based on nominations received. Anyone may nominate a candidate for the Prize.