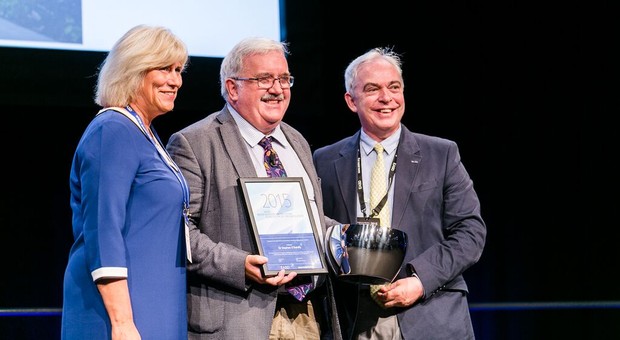 The award ceremony took place during the European Association for the Study of Diabetes (EASD) annual meeting in Stockholm. In front of an audience of close to 4,000 meeting participants, Stephen O’Rahilly gave a half-hour talk on his research after which there was a reception in The Garden Restaurant.

– It is a huge thrill. It is probably the biggest audience I have ever spoken in front of. I feel very honored to be the first recipient of this award, which I am sure will fuel and help sustain superb research over the following years, said Stephen O’Rahilly.

– I think the prize will bring prominence to the importance of diabetes as a disease area. When there are many health challenges such as cancer and immune disorders, diabetes is sometimes neglected. It is a hugely important disease so anything we can do to highlight the importance of finding a cure is really valuable, he added.

The Prize is awarded to recognize outstanding research or technology contributions to the understanding of diabetes, its disease mechanisms or its complications.

Professor O’Rahilly’s research has focused on discovering the underlying causes of type 2 diabetes and obesity at the molecular level and turning these discoveries into improved diagnosis and treatment of people. His research has revealed numerous previously undiscovered genetic causes of the two diseases, including several that can be treated.

The Prize is of DKK 6 million. This is the first year that the Prize is being awarded.