Emil Bülow was the overall winner of the Young Scientists 2014 competition and was congratulated by His Royal Highness Prince Joachim and Minister of Education, Christine Antorini. Photo: Sanne Vils Axelsen 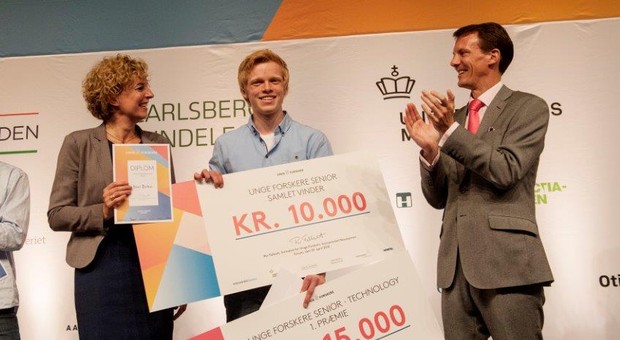 Can we prevent hair from turning grey? Is it possible to remove tattoos with enzymes? Can you feed your rabbits from your mobile phone while on holiday?

There were plenty of good ideas at the final of the “Young Scientists” competition held in Copenhagen on Tuesday. The nationwide competition is open to all school children aged 6 to 19 years and is Denmark’s largest natural science talent competition in primary and secondary schools.

100 projects from a total of 1,200 registered entries had made it through the regional semi-finals to the final in Copenhagen, where the patron of the competition, His Royal Highness Prince Joachim, and the Danish Minister of Education, Christine Antorini (S), awarded the prizes to the winners. In total, prizes of DKK 250,000 were awarded, including cheques and travel grants.

His Royal Highness Prince Joachim declared that all of the participants were “winners”.

– But the biggest winner is Denmark. It is your bright minds that will shape the future of our society, said His Royal Highness.

The competition is supported by a large number of companies and foundations, including the Novo Nordisk Foundation which has awarded DKK 6 million over three years to the competition. The purpose of Young Scientists is to stimulate and increase the interest in the natural sciences, the environment, technology and innovation among children and adolescents in Denmark.

All the prize winners could barely fit on the podium.