On Tuesday, Jens Bukh (left) and Bernard Henrissat were officially presented with the Novo Nordisk Prize and the Novozymes Prize. 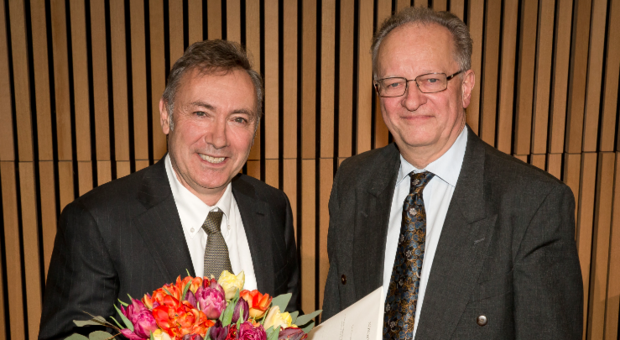 It was an even greater day than usual when the Novo Nordisk Foundation held its annual prize giving ceremony on 17 March 2015. The Foundation awarded not one but two major prizes.

The Novo Nordisk Prize was awarded to Professor Jens Bukh from Hvidovre Hospital and University of Copenhagen for his pioneering studies of hepatitis C virus, which annually kills 350,000 people worldwide.

The newly established Novozymes Prize was awarded to the world famous French enzyme researcher Professor Bernard Henrissat, who is Research Director at the Centre Nationale de la Recherche Scientifique at Aix Marseille University. Henrissat was awarded the prize for his massive work on classification of carbohydrate-modifying enzymes that have led to the creation of the free online database CAZy used by countless researchers working in fields of research such as biofuels and metabolism.

An honored Bernard Henrissat stated at the award ceremony: “It’s a huge honor to be selected by skilled research colleagues for this award as the first ever. It is unique as an enzyme researcher to receive this prize in Denmark – the center of the world for enzyme research.”

In addtion to listening to lectures by the prize winners, the 240 invited guests had the opportunity to become acquainted with the two latest recipients of the Novo Nordisk Foundation Laureate Research Grants, Tamas Horvath and Lars Nielsen, who gave a short introduction to their research – the latter via in video interview from Australia. The grants are awarded to outstanding international researchers who wish to come to Denmark to establish and strengthen their research programmes.